Why is studying spin properties of one-dimensional quantum nanowires important?

Quantum nanowires-which have length but no width or height-provide a unique environment for the formation and detection of a quasiparticle known as a Majorana zero mode.

A Majorana fermion is a composite particle that is its own antiparticle.

Antimatter explainer: Every fundamental particle has a corresponding antimatter particle, with the same mass but opposite electrical charge. For example, the antiparticle of an electron (charge -1) is a positron (charge +1)

Such unusual *particle's* interest academically and commercially comes from *their* potential use in a topological quantum computer, predicted to be immune to the decoherence that randomises the precious quantum information.

Majorana zero modes can be created in quantum wires made from special materials in which there is a strong coupling between their electrical and magnetic properties.

In particular, Majorana zero modes can be created in one-dimensional semiconductors (such as semiconductor nanowires) when coupled with a superconductor.

In a one-dimensional nanowire, whose dimensions perpendicular to length are small enough not to allow any movement of subatomic particles, quantum effects predominate.

Majorana fermions, which are their own antiparticle, have been theorised since 1937, but have only been experimentally observed in the last decade. The Majorana fermion's 'immunity' to decoherence provides potential use for fault-tolerant quantum computing.

The magnetic 'spin' of an electron is like a little bar magnet, whose orientation can be set with an applied magnetic field.

In materials with a 'spin-orbit interaction' the spin of an electron is determined by the direction of motion, even at zero magnetic field. This allows for all electrical manipulation of magnetic quantum properties.

Despite intense experimental work, it has proven extremely difficult to unambiguously detect this spin-gap in semiconductor nanowires, since the spin-gap's characteristic signature (a dip in its conductance plateau when a magnetic field is applied) is very hard to distinguish from unavoidable the background disorder in nanowires.

The new study finds a new, unambiguous signature for the spin-orbit gap that is impervious to the disorder effects plaguing previous studies.

"This signature will become the de-facto standard for detecting spin-gaps in the future," says lead author Dr Karina Hudson.

The use of Majorana zero modes in a scalable quantum computer faces an additional challenge due to the random disorder and imperfections in the self-assembled nanowires that host the MZM.

It has previously been almost impossible to fabricate reproducible devices, with only about 10% of devices functioning within desired parameters.

The latest UNSW results show a significant improvement, with reproducible results across six devices based on three different starting wafers.

As well as support by the Australian Research Council, funding was received from Germany's Deutsche Forschungsgemeinschaft the UK's Engineering and Physical Sciences Research Council and the Sydney Quantum Academy. 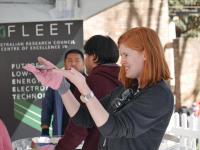