Children whose mothers were nurturing during the preschool years, as opposed to later in childhood, have more robust growth in brain structures associated with learning, memory and stress response than children with less supportive moms, according to research at Washington University School of Medicine in St. Louis.

The study is published online April 25 in the Proceedings of the National Academy of Sciences Early Edition.

The researchers studied a series of brain scans of children from preschool through early adolescence, finding a sharper rise in the volume of the hippocampus in the kids whose mothers supported and nurtured them during the preschool years. That region of the brain is critical to learning, memory and regulating emotions. In contrast, the hippocampus appeared smaller in adolescents whose mothers were less supportive during the preschool period, even if their mothers became more supportive in elementary or middle school.

The new research builds on previous findings by the same investigators that showed a link between maternal nurturing and a larger hippocampus observed in brain scans conducted at the time the children reached school age. In the new study, the researchers were able to observe steady growth in the hippocampus of children with supportive mothers across multiple brain scans taken at different time periods, with 127 children receiving three MRI scans each from the time they first started school through early adolescence.

"The parent-child relationship during the preschool period is vital, even more important than when the child gets older," Luby said. "We think that's due to greater plasticity in the brain when kids are younger, meaning that the brain is affected more by experiences very early in life. That suggests it's vital that kids receive support and nurturing during those early years."

The researchers also found that the growth trajectory in the hippocampus was associated with healthier emotional functioning when the children entered their teen years. When parental nurturing didn't begin until later in childhood, such support didn't provide the same benefits in brain growth, the researchers noted.

"This finding highlights the critical importance of caregiving in sculpting aspects of brain development that are important to how children function as they mature," said co-author Deanna M. Barch, PhD, a Washington University Psychologist and chair of the Department of Psychological & Brain Sciences.

The researchers measured nurturing in mothers by closely observing and scoring videotaped interactions between mothers and their children. The investigators observed mothers and children under moderately stressful conditions, explained Luby, the Samuel and Mae S. Ludwig Professor of Child Psychiatry and director of Washington University's Early Emotional Development Program.

"The mother is asked to complete a task while we give the child an attractive gift to open, but we don't allow it to be opened right away," she said. "It's a stressful condition like those that happen multiple times each day in any given family, like when you're cooking dinner and a child wants attention. The child needs something, but you have something else to do, so it challenges your parenting skills."

Parents who are able to maintain their composure and complete assigned tasks while still offering emotional support to their children are rated as more nurturing and supportive. Parents who dismiss their children, or behave in punitive ways during the test, receive lower marks for support.

Small changes in support indicated big differences in outcomes, Luby said. In examining the brain scans, the researchers found that children whose mothers were more supportive than average had increases in growth of the hippocampus that were more than two times greater than in those whose mothers were slightly below average on the nurturing scale.

Luby believes the findings suggest it may be possible to help children do better in school, cope better in life and develop emotionally by helping parents learn to provide more support and nurturing early in the lives of their children.

"Early maternal support affects the child's brain development," she said. "We also know that providing support to parents can have a positive impact on other behavioral and adaptive outcomes in children. So we have a very logical reason to encourage policies that help parents become more supportive." 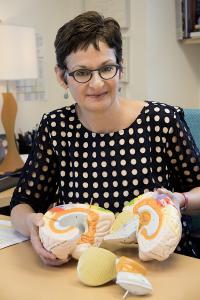 Maternal Support and the Volume of the Brain's Hippocampus