In their work toward 3-D printing transplantable tissues and organs, bioengineers and scientists from Rice University and Baylor College of Medicine have demonstrated a key step on the path to generate implantable tissues with functioning capillaries.

In a paper published online in the journal Biomaterials Science, a team from the laboratories of Rice bioengineer Jordan Miller and Baylor College of Medicine biophysicist Mary Dickinson showed how to use a combination of human endothelial cells and mesenchymal stem cells to initiate a process called tubulogenesis that is crucial to the formation of blood-transporting capillaries.

The work is an important step with fragile endothelial cells (ECs) made from "induced pluripotent stem cells," or iPSCs, a type of cell that can potentially be made from the cells of any human patient. Because iPSCs can be patient-specific, researchers hope to find ways of using them to generate tissues and replacement organs that can be transplanted without risk of rejection by a patient's immune system. But the fragility of endothelial cells during laboratory growth has limited the utilization of this critical cell type, which is found in all vasculature.

"Our work has important therapeutic implications because we demonstrate utilization of human cells and the ability to live-monitor their tubulogenesis potential as they form primitive vessel networks," said study lead author Gisele Calderon, a graduate student in Miller's Physiologic Systems Engineering and Advanced Materials Laboratory.

"We've confirmed that these cells have the capacity to form capillary-like structures, both in a natural material called fibrin and in a semisynthetic material called gelatin methacrylate, or GelMA," Calderon said. "The GelMA finding is particularly interesting because it is something we can readily 3-D print for future tissue-engineering applications."

Tissue engineering, also known as regenerative medicine, is a field aimed at integrating advances in stem cell biology and materials science to grow transplantable replacement tissues and organs. While tissue engineers have found dozens of ways to coax stems cells into forming specific kinds of cells and tissues, they still cannot grow tissues with vasculature -- capillaries and the larger blood vessels that can supply the tissues with life-giving blood. Without vascularization, tissues more than a few millimeters in thickness will die due to lack of nutrients, so finding a way to grow tissues with blood vessels is one of the most sought-after advances in the field.

Miller, who earned his Ph.D. at Rice in 2008, has studied vascularization in tissue engineering for more than 14 years. During his postdoctoral studies at the University of Pennsylvania, he also became heavily involved in the open-source 3-D printing movement, and his work at Rice combines both.

"Ultimately, we'd like to 3-D print with living cells, a process known as 3-D bioprinting, to create fully vascularized tissues for therapeutic applications," said Miller, assistant professor of bioengineering. "To get there, we have to better understand the mechanical and physiological aspects of new blood-vessel formation and the ways that bioprinting impacts those processes. We are using 3-D bioprinting to build tissues with large vessels that we can connect to pumps, and are integrating that strategy with these iPS-ECs to help us form the smallest capillaries to better nourish the new tissue."

Each of the trillions of living cells in the human body are constantly supplied with oxygen and nutrients by tiny blood vessels known as capillaries. Measuring just a few thousandths of a millimeter in diameter, some capillaries are so narrow that individual blood cells must squeeze through them in single-file. Capillaries are made entirely from networks of endothelial cells, the type of cell that lines the inner surface of every blood vessel in the human body.

In the process of tubulogenesis -- the first step to making capillaries -- endothelial cells undergo a series of changes. First, they form small, empty chambers called vacuoles, and then they connect with neighboring cells, linking the vacuoles together to form endothelial-lined tubes that can eventually become capillaries.

"We expect our findings will benefit biological studies of vasculogenesis and will have applications in tissue engineering to prevascularize tissue constructs that are fabricated with advanced photo-patterning and three-dimensional printing," said Dickinson, the Kyle and Josephine Morrow Chair in Molecular Physiology and Biophysics at Baylor College of Medicine and adjunct professor of bioengineering at Rice.

In the study, Calderon, Rice undergraduate Patricia Thai and colleagues investigated whether commercially available endothelial cells grown from iPSCs had tubulogenic potential. The test examined this potential in two types of semisolid gels -- fibrin and GelMA. Finally, the researchers also investigated whether a second type of stem cell, human mesenchymal stem cells, could improve the likelihood of tubulogenesis.

Calderon said fibrin was chosen for the experiment because it's a natural material that's known to induce tubulogenesis for wound healing. As such, the researchers expected endothelial cells would be induced to form tubules in fibrin.

Calderon said the first step in the experiments was to develop a third-generation lentivirus reporter to genetically modify the cells to produce two types of fluorescent protein, one located only in the nucleus and another throughout the cell. This permanent genetic modification allowed the team to noninvasively observe the cell morphology and also identify the action of each individual cell for later quantitative measurements. Next, the cells were mixed with fibrin and incubated for a week. Several times per day, Calderon and Thai used microscopes to photograph the growing samples. Thanks to the two fluorescent markers, time-lapse images revealed how the cells were progressing on their tubulogenic odyssey.

Calderon conducted advanced confocal microscopy at the Optical Imaging and Vital Microscopy Core facility at Baylor College of Medicine. Calderon and Thai then used an open-source software called FARSIGHT to quantitatively analyze the 3-D growth patterns and development character of the tubulogenenic networks in each sample. In fibrin, the team found robust tubule formation, as expected. They also found that endothelial cells had a more difficult time forming viable tubules in GelMA, a mix of denatured collagen that was chemically modified with methacrylates to allow rapid photopolymerization.

Over several months and dozens of experiments the team developed a workflow to produce robust tubulogenesis in GelMA, Calderon said. This involved adding mesenchymal stem cells, another type of adult human stem cell that had previously been shown to stabilize the formation of tubules.

Miller said that while clinical applications of 3-D bioprinting are expected to advance rapidly over the next few decades, even small tissue samples with working capillary networks could find use much more quickly for laboratory applications like drug testing.

"You could foresee using these three-dimensional, printed tissues to provide a more accurate representation of how our bodies will respond to a drug," Miller said. "Preclinical human testing of new drugs today is done with flat two-dimensional human tissue cultures. But it is well-known that cells often behave differently in three-dimensional tissues than they do in two-dimensional cultures. There's hope that testing drugs in more realistic three-dimensional cultures will lower overall drug development costs. And the potential to build tissue constructs made from a particular patient represents the ultimate test bed for personalized medicine. We could screen dozens of potential drug cocktails on this type of generated tissue sample to identify candidates that will work best for that patient."

Additional co-authors include Bagrat Grigoryan of Rice, Chih-Wei Hsu of Baylor College of Medicine and Sydney Gibson of both Rice and Baylor College of Medicine. The research was supported by the Gulf Coast Consortia's John S. Dunn Collaborative Research Fund, the Cancer Prevention and Research Institute of Texas and the National Institutes of Health. Calderon, Grigoryan and Gibson were also supported by national graduate research fellowships from the National Science Foundation.

VIDEO is available at: https://youtu.be/GheE3DE-ZjA

A copy of the paper is available at: http://pubs.rsc.org/en/content/articlelanding/2017/bm/c7bm00223h#!divAbstract 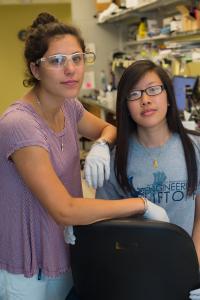