DURHAM, N.C. -- The world's most technologically advanced robots would lose in a competition with a tiny crustacean.

Just the size of a sunflower seed, the amphipod Dulichiella cf. appendiculata has been found by Duke researchers to snap its giant claw shut 10,000 times faster than the blink of a human eye.

The claw, which only occurs on one side in males, is impressive, reaching 30% of an adult's body mass. Its ultrafast closing makes an audible snap, creating water jets and sometimes producing small bubbles due to rapid changes in water pressure, a phenomenon known as cavitation.

Three things make this ultra-fast movement unique said Sarah Longo, who studied the amphipods as part of her postdoctoral studies at Duke: the amphipods' really small size, the fact that they live in water, and the repeatability of their movements.

Other animals have comparable accelerations, but none has the same set of constraints: the jaws of trap-jaw ants are faster, but move through air. Mantis shrimp are comparably fast and aquatic, but much larger. Jellyfish stinging cells are ejected with higher acceleration, but only once.

"We take repeatability for granted in biology," said Longo, a visiting assistant professor at Towson University and first author on the paper. "Lots of ultrafast movements are not repeatable, such as ballistic seed ejection by plants. Some of these seeds are going even faster than this amphipod and traveling an impressive distance, but they are one-off events."

Repeatability is a big challenge for engineering, said Longo. Parts that move very fast often become disconnected, break, or have to be manually reloaded.

"The fact that this movement is repeatable is marking an interesting boundary," Longo said. "There appears to be a cutoff where you are going so fast that you inherently have to give up repeatability. These animals are showing how fast you can actually go without breaking."

"These organisms are doing things with capabilities that we currently cannot build. Engineered systems that can be used repeatedly are several orders of magnitude slower and bigger than these animals," said Sheila Patek, a professor at Duke Biology and senior author on the paper.

The potential behind ultrafast movements is so great that the Army is paying attention to these small animals.

"Small organisms achieve incredible actuation authority with no adherence to the rules we use for engineering using motors, springs, and structures," said Samuel Stanton, program manager, Army Research Office, an element of the U.S. Army Combat Capabilities Development Command's Army Research Laboratory. "There is a myriad of organisms from which we can learn a great deal for future Army small robotics and this research team is discovering a whole new set of rules we should be following."

"There is a lot that biology can tell us," Longo said. "Evolution has had millions of years to come up with solutions to all sorts of problems that we can't even articulate yet."

This discovery is surprising given that these amphipods are very common, being found all over the Eastern coast of North America.

"The majority of biologists tend not to pay much attention to amphipods, because they are so small," said Rich Palmer, a professor at the University of Alberta and co-author on the paper. "We would never have guessed that they make these ultra fast movements."

Palmer had his attention drawn to these animals when colleagues mentioned in a casual conservation that certain amphipods made snapping noises.

Intrigued, he suggested to Patek a trip to the Duke Marine Laboratory, in Beaufort, NC, in order to investigate these snaps further. To everyone's surprise and delight, they found thousands of these ultra fast animals right off the docks.

"Hanging in debris, off a dock, in some junky algae, are creatures whose capabilities we didn't even know existed," says Patek. "This is what happens if you take a second look at a weird animal and just take the time to figure out what they are doing."

"You have to be curious, you have to be brave, and you can't be afraid of wasting time," said Palmer. "That is how amazing discoveries are made." 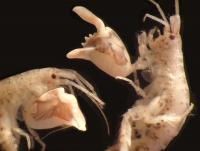 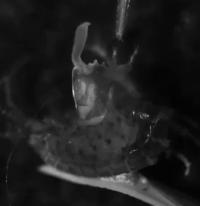