Heidelberg, 1 April 2010 - Name a human gene, and you'll find a movie online showing you what happens to cells when it is switched off. This is the resource that researchers at the European Molecular Biology Laboratory (EMBL) in Heidelberg, Germany, and their collaborators in the Mitocheck consortium are making freely available, as the result of a study in which they have identified the genes involved in mitosis – the most common form of cell division – in humans. Published today in Nature, their work begins to unravel the molecular workings of one of the most fundamental processes of life: how one cell becomes two.

"Without mitosis, nothing happens in life, really", says Jan Ellenberg, who led the study at EMBL, "and when mitosis goes wrong, you get defects like cancer."

Of the 22,000 genes in each human cell, almost 600 play a part in mitosis, Ellenberg and colleagues found. To uncover which genes are involved in this process, the scientists developed a new method using high-throughput imaging of living cells. They silenced, or inactivated, each of the 22,000 human genes one by one in a different set of cells, and filmed those cells for 48 hours under a microscope. This generated almost 200,000 time-lapse movies of mitosis. Having a person – or even a group of people – process such vast amounts of information would be almost impossible, so the scientists created a new computer program that analyses the footage and automatically detects what characteristic defects cells display, and in what order. By grouping genes with similar effects – for instance, genes which when inactivated led to cells with 2 nuclei instead of one, after division – they were able to identify genes involved in mitosis, which they confirmed with further experimental assays.

"The end result is that we now have a very rich resource for the scientific community, as we're making all the movies and all the analysis data freely available online," Ellenberg emphasises: "Scientists can go to the website, type in the name of their favourite gene, and watch what happens when it is silenced; they can find out what other genes have similar effects – all in a few mouse clicks, instead of months or years of work in the lab!"

But mitosis is not solved yet, the scientists say. They have yet to uncover exactly how these genes act at the molecular level – a task which will be tackled by a follow-up project called Mitosys. All data from this follow-up work will also be made freely available online, creating what Ellenberg describes as a 'one-stop-shop' for mitosis research.

In the mean time, the new methodology the EMBL scientists developed to silence all of an organism's genes in a fast and systematic manner is itself proving a boon to the scientific community.

"A year after we developed these new siRNA microarrays," says Rainer Pepperkok, who led the method's development at EMBL, "they're already in use by over 10 research groups from across Europe."

The current study looked at HeLa cells, a widely studied line of cancer cells. Now that they have narrowed the search from a daunting 22,000 to a more manageable 600 genes, the scientists would like to investigate how these same genes act in other cancers and in healthy cells, as such comparisons could help to identify markers which could be used for diagnosis or to help make better-informed treatment decisions.

The study was carried out as part of the Mitocheck consortium, coordinated by Jan-Michael Peters at the Research Institute of Molecular Pathology in Vienna, Austria, and the data is available at www.mitocheck.org.

Movies for the human genome 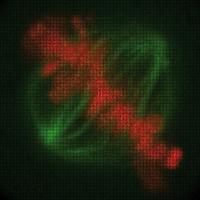 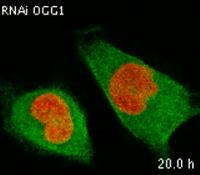