Melting over the Greenland ice sheet shattered the seasonal record on August 8 – a full four weeks before the close of the melting season, reports Marco Tedesco, assistant professor of Earth and atmospheric sciences at The City College of New York.

The melting season in Greenland usually lasts from June – when the first puddles of meltwater appear – to early-September, when temperatures cool. This year, cumulative melting in the first week in August had already exceeded the record of 2010, taken over a full season, according to Professor Tedesco's ongoing analysis.

"With more yet to come in August, this year's overall melting will fall way above the old records. That's a goliath year – the greatest melt since satellite recording began in 1979," said Professor Tedesco.

This spells a change for the face of southern Greenland, he added, with the ice sheet thinning at its edges and lakes on top of glaciers proliferating.

Professor Tedesco noted that these changes jibe with what most of the models predict – the difference is how quickly this seems to be happening.

To quantify the changes, he calculated the duration and extent of melting throughout the season across the whole ice sheet, using data collected by microwave satellite sensors.*

This 'cumulative melting index' can be seen as a measure of the 'strength' of the melting season: the higher the index, the more melting has occurred. (The index is defined as the number of days when melting occurs multiplied by the total area subject to melting.)

Dr. Thomas Mote, Professor of Geography at the University of Georgia and colleague of Professor Tedesco, confirmed that the cumulative melt in 2012 had surpassed that of 2010 using a similar analysis.

The August 8th record differs from NASA's announcement of unprecedented melting in mid-July, reported by Professor Tedesco and other researchers. Then, they found that the Greenland ice sheet had melted over 97 percent of its surface.

"That event was exceptional in the sense that it was an extremely rare event," said Professor Tedesco. "Imagine Rio de Janeiro under a layer of snow and you get the idea."

The extreme melting detected in mid-July, on the other hand, generated liquid water that refroze after a few days. "This changed the physical properties of the snowpack – making a slushy layer that turned into an icy crust after refreezing – but very likely it did not add to the runoff of meltwater that makes sea levels rise."

The cumulative melting index, on the other hand, does account for water flowing to the ocean. The same meltwater can affect ice dynamics by lubricating the base of the ice sheet and speeding its slide toward the sea.

This year, Greenland experienced extreme melting in nearly every region – the west, northwest and northeast of the continent – but especially at high elevations. In most years, the ice and snow at high elevations in southern Greenland melt for a few days at most. This year it has already gone on for two months.

"We have to be careful because we are only talking about a couple of years and the history of Greenland happened over millennia," cautioned Professor Tedesco. "But as far as we know now, the warming that we see in the Artic is responsible for triggering processes that enhance melting and for the feedback mechanisms that keep it going. Looking over the past few years, the exception has become part of the norm."

Note: An upcoming paper submitted by Professor Tedesco and his colleagues examines the losses and gains that the Greenland ice sheet could experience, as projected through the end of the 21st Century according to different CO2-level scenarios. 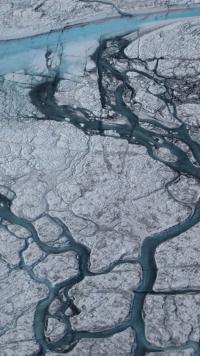