Startled porcupine fish suck in air or water to inflate their bodies, becoming a prickly balloon-like shape to defend themselves from predators and some contain a neurotoxin a thousand times more potent than cyanide in their ovaries and livers. They are also good at offense, crushing the shells of clams and other marine mollusks with beak-like jaws so tough that they are preserved as fossils to be discovered millions of years later.

Two of the newly discovered species, named Chilomycterus tyleri, in honor of the Smithsonian's James C. Tyler, senior scientist emeritus at the National Museum of Natural History -- an expert on this group of fish -- and C. expectatus, named for the arrangement of its dental plates, were discovered in Panama's Gatun formation.

The third new species, Diodon serratus, named for the serrated edge of its crushing dental sheet, comes from the Socorro Formation in Venezuela. When Darwin traveled to the tropics on the Voyage of the Beagle, he noticed this fish that swims upside down when inflated. He even mentioned a report from a fellow naturalist, that porcupine fish could gnaw their way out of the stomach of a shark.

Today 18 species of porcupine fish populate tropical seas worldwide. Species in the genus Diodon are common in shallow, tropical waters of both the Atlantic and Pacific. In contrast, only one species of the genus Chilomycterus is found in the Eastern Pacific. The rest are in the Atlantic.

When the Isthmus of Panama arose from the sea to connect North and South America and divide the Atlantic from the Pacific, the oceans on each side of this intercontinental bridge changed forever. The Eastern Pacific became cooler and more nutrient rich and the Caribbean because warmer and more nutrient poor, characterized by more coral reefs and seagrass beds.

This research team hopes to better understand why there was only one Chilomycterus species in a fossil deposit near Panama's Tuira river on the Pacific side of the isthmus of Panama. 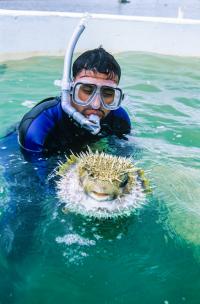 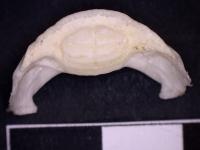