This release is available in Arabic, Chinese, French and Japanese.

Researchers got their first up-close look at dust from the surface of a small, stony asteroid after the Hayabusa spacecraft scooped some up and brought it back to Earth. Analysis of these dust particles, detailed in a special issue of the journal Science this week, confirms a long-standing suspicion: that the most common meteorites found here on Earth, known as ordinary chondrites, are born from these stony, or S-type, asteroids. And since chondrites are among the most primitive objects in the solar system, the discovery also means that these asteroids have been recording a long and rich history of early solar system events.

The 26 August issue of Science includes six reports and a Perspective article that highlight the initial studies of this asteroid dust. Science is published by AAAS, the nonprofit science society.

The Hayabusa spacecraft was launched by the Japan Aerospace Exploration Agency (JAXA) in 2003 to sample the surface of the near-Earth asteroid known as 25143 Itokawa. The unmanned vessel reached its destination a little more than two years later—and in November 2005, it made two separate touchdowns on the surface of Itokawa. Although its primary sampler malfunctioned, the spacecraft was able to strike the asteroid's surface with an elastic sampling horn and catch the small amount of dust particles that were kicked up. After reentering Earth's atmosphere and landing in South Australia in June 2010, Hayabusa's delicate samples were analyzed extensively by various teams of researchers.

"Science is very excited and pleased to be presenting these important scientific analyses," said Brooks Hanson, Deputy Editor of the Physical Sciences. "The first samples that researchers collected beyond Earth were from the moon, and the first analyses of those samples were also published in Science. Those samples, along with the more recent sampling of a comet and the solar wind, have changed our understanding of the solar system and Earth. They are still yielding important results. These Hayabusa samples are the first samples of an asteroid. Not only do they provide important information about the history of the asteroid Itokawa, but by providing the needed ground truth that is only possible through direct sampling, they also help make other important samples—like meteorite collections and the lunar samples—even more useful."

The asteroid sampled by Hayabusa is a rocky, S-type asteroid with the appearance of a rubble pile. Based on observations from the ground, researchers have believed that similar S-type asteroids, generally located in our solar system's inner and middle asteroid belt, are responsible for most of the small meteorites that regularly strike Earth. But, the visible spectra of these asteroids have never precisely matched those of ordinary chondrites—a fact that has left researchers suspicious of their actual affiliation. The only way to confirm a direct relationship between meteorites and these S-type asteroids was to physically sample the regolith from an asteroid's surface.

Tomoki Nakamura from Tohoku University in Sendai, Japan and colleagues from across the country and in the United States were among the first to analyze this regolith brought back by Hayabusa. The team of researchers used a combination of powerful electron microscopes and X-ray diffraction techniques to study the mineral chemistry of Itokawa's dust particles.

"Our study demonstrates that the rocky particles recovered from the S-type asteroid are identical to ordinary chondrites, which proves that asteroids are indeed very primitive solar system bodies," said Nakamura.

The researchers also noticed that Itokawa's regolith has gone through significant heating and impact shocks. Based on its size, they conclude that the asteroid is actually made up of small fragments of a much bigger asteroid.

"The particles recovered from the asteroid have experienced long-term heating at about 800 degrees Celsius," said Nakamura. "But, to reach 800 degrees, an asteroid would need to be about 12.4 miles (20 kilometers) in diameter. The current size of Itokawa is much smaller than that so it must have first formed as a larger body, then been broken by an impact event and reassembled in its current form."

Separate teams of researchers, including Mitsuru Ebihara from Tokyo Metropolitan University and colleagues from the United States and Australia, cut open the tiny regolith grains returned by Hayabusa to get a look at the minerals inside them. Their composition shows that the dust grains have preserved a record of primitive elements from the early solar system. Now, those mineral compositions can be compared to tens of thousands of meteorites that have fallen to Earth, and then correlated to the visible spectra of other asteroids in space.

Akira Tsuchiyama from Osaka University in Toyonaka, Japan and colleagues from around the world also analyzed the three-dimensional structures of the dust particles. Since dust from the surface of the moon is the only other type of extraterrestrial regolith that researchers have been able to sample directly (from the Apollo and Luna missions), these researchers closely compared the two types.

"The cool thing about this Itokawa analysis is the tremendous amount of data we can get from such a small sample," said Michael Zolensky from the NASA Johnson Space Center in Houston, Texas, a co-author of the research. "When researchers analyzed regolith from the moon, they needed kilogram-sized samples. But, for the past 40 years, experts have been developing technologies to analyze extremely small samples. Now, we've gained all this information about Itokawa with only a few nano-grams of dust from the asteroid."

According to the researchers, Itokawa's regolith has been shaped by erosion and surface impacts on the asteroid, whereas lunar regolith, which has spent more time exposed to solar winds and space weathering, has been more chemically altered.

Takaaki Noguchi from Ibaraki University in Mito, Japan, and colleagues cite this chemical difference between the lunar dust and the Itokawa samples as one of the reasons astronomers have never been able to definitively tie ordinary chondrites to S-type asteroids in the past.

"Space weathering is the interaction between the surface of airless bodies, like asteroids and the moon, and the energetic particles in space," said Noguchi. "When these energetic particles—like solar wind, plasma ejected from the Sun and fast-traveling micrometeoroids—strike an object, pieces of them condense on the surface of that object. In the vacuum of space, such deposits can create small iron particles that greatly affect the visible spectra of these celestial bodies when they are viewed from Earth."

But now, instead of using lunar samples to estimate the space weathering on an asteroid in the future, researchers can turn to the asteroid regolith for direct insight into such processes.

Two more international studies led by Keisuke Nagao from the University of Tokyo and Hisayoshi Yurimoto from Hokkaido University in Sapporo, Japan, respectively, have determined how long the regolith material has been on the surface of Itokawa and established a direct link between the oxygen isotopes in ordinary chondrites and their parent, S-type asteroids.

According to the researchers, the dust from Itokawa has been on the surface of the asteroid for less than eight million years. They suggest that regolith material from such small asteroids might escape easily into space to become meteorites, traveling toward Earth.

"This dust from the surface of the Itokawa asteroid will become a sort of Rosetta Stone for astronomers to use," according to Zolensky. "Now that we understand the bulk mineral and chemical composition of the Hayabusa sample, we can compare them to meteorites that have struck the Earth and try to determine which asteroids the chondrites came from."

The report by Yurimoto et al. received additional support from a Monka-sho grant and the NASA Muses-CN/Hayabusa Program.

The report by Ebihara et al. received additional support from a grant-in-aid defrayed by the Ministry of Education, Culture, Science and Technology of Japan and a grant from NASA.

The report by Tsuchiyama et al. received additional support from a grant-in-aid of the Japan Ministry of Education, Culture, Sports, Science and Technology and the NASA Muses-CN/Hayabusa Program. 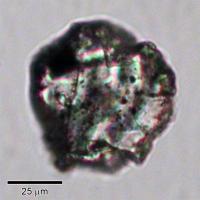