New Haven, Conn. — Throughout the animal kingdom brilliant colors or elaborate behavioral displays serve as "advertisements" for attracting mates. But, what do the ads promise, and is there truth in advertizing? Researchers at Yale theorize that when males must provide care for the survival of their offspring, the males' signals will consistently be honest — and they may devote more of their energy to caring for their offspring than to being attractive.

The idea that males showcase their best qualities to attract females for mating isn't a new one, nor is the idea that they might be deceptive in what they are promoting. Instead, the new findings better predict the requirement for honesty in advertising as a function of the male's suitability for parenting, according to Natasha Kelly, a graduate student in ecology and evolutionary biology at Yale and lead author of the study.

The peacock's ornate fanned tail — or the primping and posturing of a guy in a bar — are "advertisements" or mating displays that take substantial energy to maintain. When a male's energy is heavily focused on keeping up his appearance, he may have little energy to devote to caring for offspring. But that may be okay, say the researchers — in species where he does not really need to tend to the kids.

Previous research suggested that, under certain circumstances, males could be dishonest about their parenting skills and still have high reproductive success. This new model, now appearing in the online version of the Proceedings of the Royal Society B, examines the reliability of males' mating signals when they must care for offspring — an aspect that was missing in earlier studies.

There are many species in which males could, but do not have to, provide parental care — because females will pick up the slack. The Yale researchers focused on those species, like stickleback fish, where females cannot pick up the slack and males who do not provide care risk the survival of their offspring.

"This new work shows that when males can not escape the cost of failing to provide care, their advertisements will tend to tend to reliably indicate how much care they will provide," said senior author Suzanne Alonzo, assistant professor of ecology and evolutionary biology at Yale.

"The qualifier in this case is where males are obligated to provide care," said Kelly. "In that case, the quiet guy in the corner might be giving the more reliable advertisement for fatherhood."

The National Science Foundation and Yale University funded this research.

Mate selection: How does she know he'll take care of the kids? 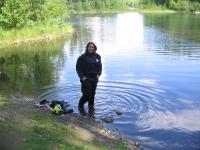