A groundbreaking home that uses the latest smart technology to give people with dementia and other serious long-term health conditions greater independence will be showcased for the first time in Bristol (UK) tomorrow.

The technology, which has been developed by the Bath Institute of Medical Engineering (BIME) at the University of Bath, has been designed to help people readjust to living on their own after a stay in hospital, and aims to reduce the risk of users being readmitted to hospital or going into long term care.

It uses special sensors that can wirelessly 'talk' to devices, such as the cooker, taps and light switches, in response to the behaviour of the resident. By monitoring movement within the home, the system is able to respond to many different situations without having to contact care staff, often just using simple voice prompts, which could be recorded by family members.

For example, if the occupant was detected opening the main door at inappropriate times they would be given a prompt to let them know the time and encourage them to go back to bed. Similarly, if the occupant got out of bed at night, the bedroom lights would be gently faded up. (Other examples can be found in the notes below.)

The system provides a very quick response and gives residents a greater feeling of control and independence as it doesn't rely on people coming in from outside to resolve problems, with outside help only called in for real emergencies.

The technology in the 'enabling smart home' at the Hillside Court 'very sheltered' housing scheme in St George, Bristol, has been developed over several years in consultation with people with dementia and their carers.

"The really smart thing about the wireless technology we have used in this flat is that we can take the elements that clients find particularly useful in the smart home and install them in their own home," said Professor Roger Orpwood, Director of BIME.

"The whole installation is quite unique because it is designed to empower the resident rather than relying on outside help to deal with problems.

"The idea is that residents will stay in the smart home for a short period of around three months, before returning to their own home."

The flat has been set up as a two year pilot to assess how the technology helps give people more independence and control, reducing the risk of users being readmitted to hospital or going into long term care.

Individual components of the system have been tested by people with dementia, but the complete installation has previously only been used at one other Housing 21 property in Lewisham, south London.

David Self, Dementia Services Advisor at Dementia Voice, said: "The work we have already done in Lewisham has shown that by using technology we can improve independence and quality of life for people with dementia and reduce anxieties for relatives, without increasing the burden on care staff.

"We hope this latest project will take things a step further with the opportunity to install the successful 'smart' elements of the flat in people's own homes."

Councillor John Kiely, Executive Member for Housing and Adult Community Care at Bristol City Council, added: "Smart technology doesn't just monitor people to make sure they stay safe, it also has the potential to preserve the dignity and independence of people with dementia who want to continue living in their own homes."

What can the technology do?

The Bath Institute of Medical Engineering (BIME) is a design and development charity working in the fields of medicine, health care and assistive technology for disabled people.http://www.bath.ac.uk/bime/

Smart way of living for people with dementia 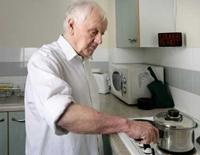