What happens when researchers and social media combine forces in the name of science? A rare wildflower from the US and a team of Twitter-savvy botanists tell us a tale of symbiosis between science and modern technology.

While hunting for the Pennsylvania state-endangered golden corydalis on steep 350-foot cliffs for a new episode of his YouTube video series, "Plants are Cool, Too!" in the heat of summer 2017, Bucknell University Professor Chris Martine and team stumbled across some interesting specimens of the enigmatic coral-bell genus Heuchera.

Posting an image of this find on Twitter, little did Martine (@MartineBotany) know that one casual Tweet of a bumblebee on what he thought was Heuchera americana would not only stir a heated discussion among fellow botanists, but also lead to the unexpected-for-this-region record of the rare and globally imperiled Appalachian endemic Heuchera alba.

The first to recognize the rare species on the tweeted image was Ryan Folk (@ry_folk), Florida Museum of Natural History. Surprised by this record, possibly the first for Pennsylvania, Martine tagged his fellow twitter-savvy botanist and plant conservation specialist with the Pennsylvania Natural Heritage Program at the Western Pennsylvania Conservancy, Scott Schuette (@mossman2000). The continuing discussion revealed that a another possible state record of H. alba was recently posted by Schuette himself on citizen science biodiversity observations tool iNaturalist.org.

After examining specimens they collected while rappelling along the cliffs, the team turned to historical collections held at the Wayne E. Manning Herbarium (BUPL) at Bucknell University to further science-proof their Twitter-fueled discovery. What they learned was that local botanists had been misidentifying this species for over a century.

Armed with new data on the habitat preferences of H. alba, the researchers discovered seven more populations of the rare plant that represent a significant range expansion for a species previously known only from small populations in the mountains of Virginia and West Virginia. The new observations and inferences, along with tips for how others might also locate and protect more populations of H. alba, is now published in the open access journal PhytoKeys.

The Twitter identification of this species in Pennsylvania is an exciting outcome that provides a model for the sorts of strides we can make when botanists embrace a combination of modern and classical approaches to discovery and collaboration.

"Importantly, this discovery is not just a cool showcase for how science and modern communications outlets can work together, it also gave us key information on the status of H. alba that can guide future conservation efforts," says Martine on the scientific value of this discovery.

Martine features Schuette and study co-author Jason Cantley, of San Francisco State University, in the latest episode of "Plants are Cool, Too!", where viewers can learn more about the steep cliffs inhabited by H. alba and the efforts of local volunteers to preserve them. 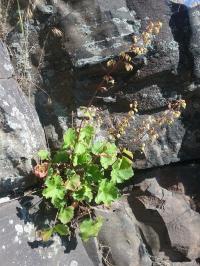