Development of disease resistance among Chesapeake Bay oysters calls for a shift in oyster-restoration strategies within the Bay and its tributaries. That's according to a new study by researchers at the Virginia Institute of Marine Science (VIMS).

The study, by professors Ryan Carnegie and Eugene Burreson, is the feature article in the most recent issue of Marine Ecology Progress Series. It is based on 50 years of VIMS research into the prevalence of MSX disease among the native eastern oyster Crassostrea virginica.

Carnegie, a Research Assistant Professor in the Shellfish Pathology Laboratory at VIMS, says "Our results point to substantial reproduction by disease-resistant oysters in the high-salinity areas where the parasite causing MSX thrives. We thus argue that reefs in areas of higher salinity should be the focus of conservation and restoration efforts, not just those in disease-free lower salinity areas."

MSX is caused by the single-celled parasite Haplosporidium nelsoni. It first appeared in Chesapeake Bay in 1959, combining with overharvesting, declines in water quality, and a second parasitic oyster disease known as Dermo to push the Bay's oyster population to one percent of historical levels. Both MSX and Dermo favor the saltier waters of the Bay's main stem, decreasing in prevalence as one moves upriver into the fresher waters of Bay tributaries, which form a safe haven from the parasites and diseases.

To date, restoration strategies have rested on the idea of protecting these "low-salinity refugia" as sources of larvae for replenishment of disease-ravaged populations in saltier areas of the Bay. These strategies are based on the high levels of mortality traditionally seen among oyster populations in saltier waters (initially more than 90 per cent), and computer models showing that tidal currents can indeed carry oyster larvae downriver from fresher to saltier areas.

Carnegie says "there's been a lot of attention given to these up-river, low salinity refugia. They've been viewed as the key source reefs that are exporting larvae into the higher salinity waters." Disease-ravaged reefs in higher salinities have been valued primarily for their fishery, which has sought to harvest doomed oysters before they succumbed.

Carnegie and Burreson's research, however, paints a different picture. They've found clear evidence that oysters in the Bay's saltier waters are developing resistance to both MSX—the focus of their paper—and Dermo, despite the increasing prevalence in the Bay of the parasites responsible for the two diseases. This is only possible through reproduction by resistant oysters in high-disease areas, thus their call for a focusing of restoration efforts onto these disease-resistant areas and populations.

Carnegie says "We basically need to confront the diseases head-on where they are most active, rather than avoiding them by working in low salinities. It's in the high-disease areas that resistance is developing most rapidly, so restoration efforts should be focused there."

Recent restoration initiatives in Virginia have included the designation of numerous sanctuary reefs in higher salinities and a rotational harvest scheme in the lower Rappahannock River, but these have been controversial. "Harvesters have viewed such efforts with skepticism," says Carnegie, "because the protected oysters would likely be lost to diseases. Yet our results suggest that strategies like these that increase the number of resistant oysters are precisely the right approach."

In fact, Carnegie and Burreson point out that restoration efforts focused on low-salinity refugia may actually be counter productive. Carnegie says "our study makes very clear what happens when oyster larvae from the low-salinity refugia settle in high salinity waters—they are removed quickly by the parasites because they are produced by genetically naïve parent oysters that haven't been selected for disease resistance." Genetic mingling of these susceptible oysters with their disease-resistant counterparts may be acting to slow the spread of disease resistance through the Chesapeake Bay oyster population.

Discovery of disease resistance among the Bay's oysters is based on research that began at VIMS in 1960 with the "Spring Imports" project. Burreson says this long-term study "clearly shows increased resistance to MSX in response to increased disease pressure." Carnegie adds "decreased disease in the wild despite favorable conditions for the parasites is a clear sign of increasing resistance among our native oysters due to long-term exposure."

The pair's research was supported in part by the A. Marshall Acuff, Sr. Memorial Endowment to the VIMS Foundation, which has supported oyster disease research at VIMS for almost 30 years. Carnegie says, "Our team really appreciates the flexibility Acuff support gives our program—the ability to rapidly respond to emerging questions, pursue new directions, and build the foundation for larger, extramurally funded projects." 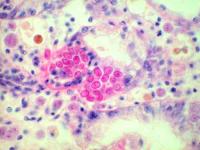 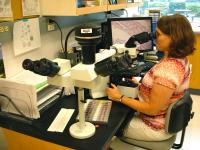