Researchers have identified a set of genes that help control early drought response in a popular global crop. The pioneering study, conducted by Dartmouth College, the University of Wyoming, and the Donald Danforth Plant Science Center, separates itself from previous research by focusing on the entire day-night cycle and by analyzing both genetic and physiological changes.

The research, appearing in the journal eLife, focuses on the plant's response early in the drought stage. By assessing change under less severe conditions, researchers hope to understand how plants respond to water stress in order to create more drought-resilient crops.

"Even before a plant shows visible signs of wilting, there are extensive changes in terms of gene expression and physiology," said C. Robertson McClung, a professor of biological sciences at Dartmouth College. "This research considers all the factors in early drought response and may hopefully help us increase food production in the years to come."

For the study, researchers focused on Brassica rapa, a crop that provides Chinese cabbage, turnips and vegetable oil. The plant is used extensively in Asia, Canada and Europe, and is of increasing importance in the United States.

The team withheld water from the plant for four days and recorded observations during the third and fourth day. By tracking the plant's reactions to water stress throughout the 48-hour period, the research team was able to identify nighttime plant activity indicating that Brassica may respond to early-stage drought by closing the stomata more fully at night. Stomata are pores on a plant that allow for the exchange of carbon dioxide and water.

During the same observations, the team identified genes that responded to drought, but that also switched on and off consistently according to the time of day even when well-watered. During drought, the normal behavior of these genes was either amplified or muted.

"The increase in expression of genes for nitrogen uptake at night during early drought is especially intriguing" said Brent Ewers, a professor at the University of Wyoming and expert in plant physiological response to environmental stress, "this provides a potential mechanism to explain observations over the past 10 years that plants increase night water use when mildly to moderately stressed by lack of water and nutrients."

The combination of genetic and physiological information on how the plant responded to water conditions at different times of day could help researchers identify specific genes that respond more strongly to water conditions. This, in turn, could lead to creating greater drought resistance in Brassica rapa and potentially other crops.

"Many genes are turned on or off at different times of the day based on the circadian clock," said McClung, an expert in genetics and circadian rhythms, "and we are trying to identify the small subset of genes that change specifically in response to drought."

Statistics cited in the research indicate that, in the U.S. alone, water stress accounts for the largest proportion of crop loss, and that 45 percent of the nation's land surface suffers from low water availability. Yields for crops like corn and soybean are most sensitive to short-term summertime droughts.

"With climate change, we will have more extreme weather," said McClung. "When it rains, it's really going to rain, and when it doesn't rain, we are really going to have drought conditions. We need to understand how plants respond to low water so that we can inform breeding to improve drought resistance."

The research, sponsored by the NSF-Plant Genome Research Program, could have major implications as the globe also grapples with an increasing population and food yields that may not reach projected targets.

While the research is still in its early stages, researchers hope that with continued success in identifying which genes are actually causing the changes that create drought response they can help plant breeders improve drought resistance more quickly and more precisely while potentially improving fertilization efficiency at the same time. 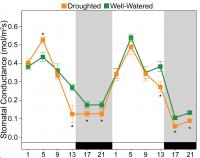