At unprecedented levels of difficulty involving highly biodiverse and continent-sized landscapes, scientists have successfully tested their ability to identify and DNA "barcode" entire assemblages of species -- the prelude to a genetic portrait of all animal life on Earth.

Revealing their results in the UK journal Molecular Ecology Notes, they report having assembled a genetic portrait of birdlife in the U.S. and Canada, and announce the startling discovery of 15 new genetically distinct species, nearly indistinguishable to human eyes and ears and consequently overlooked in centuries of bird studies.

The barcoders also successfully logged the DNA attributes of 87 bat species of Guyana and reveal six new species, characterized by unique genetic make-up. One of the new species, a look-alike of Trachops cirrhosus, feasts on frogs.

As well, the scientists report that 14 pairs of North American bird species with separate identities are in fact DNA twins, two trios of bird species are DNA triplets, and no less than eight gull species are virtually DNA identical.

The complementary papers describing the bird and bat initiatives were authored by researchers from Guelph, Ottawa and Toronto, Canada, and from New York City and Washington D.C., USA.

The bird researchers obtained DNA from "voucher" specimens in museums, augmented by samples sent in by scores of people. In all, more than 2,500 specimens were barcoded.

The DNA portrait of 643 bird species, from the Arctic tundra to the temperate woodlands to the Florida Keys, represents 93 percent of 690 known breeding species in the U.S. and Canada. Work continues to collect DNA of the remaining 47 listed North American species, as well as several more considered extinct, specimens of which exist in museums.

The work builds on 2004 research which involved only 260 bird species, criticized at the time as too narrow geographically and taxonomically to prove that bird species can be reliably distinguished through DNA.

"Now with the vast majority -- 93 to 94 percent -- of birds on the continent barcoded it's hard to argue that barcoding might work for the easy stuff but miss the difficult cases of closely related taxa," says Dr. Paul Hebert of the Biodiversity Institute of Ontario, Guelph University, Canada, who co-authored both the bird and bat papers.

"People have watched birds for so long we might think every different tweet has been heard, every different color form observed," says Dr. Hebert. However, "there are a number of cases of deep genetic divergences within what are currently called single species," he says.

The "cryptic species" are those with unique DNA barcodes but differences of song and plummage so subtle as to make them virtually indistinguishable from some other species. They are typically "small brown ground-dwelling shrubbery birds that don't attract a lot of human attention."

Even though birds may appear very similar to human observers, a species with a distinct DNA barcode very rarely interbreeds; they literally find birds of a feather as mates. Also, the fauna (birds and bats) newly distinguished by virtue of unique DNA do not yet have unique names. That issue and process is the subject of scientific discussion and debate.

"Did we find concordance between barcode results and conventional taxonomy? The answer is, resoundingly, yes. In 95 percent of cases, entities recognized as species are barcode distinct," adds Dr. Hebert.

People who put tiny bands on birds to help track migrations contributed samples for the study. Banders are extremely good at identifying species "but even they can't always identify a bird in the hand," says Dr. Hebert. "In such cases, they appreciate having a barcode record to identify with certainty the bird they banded."

Dr. Stoeckle of Rockefeller University says the world recognizes about 10,000 bird species today and predicts that, at a global scale, DNA barcoding will distinguish at least 1,000 potential new species. The researchers hope to complete an all-bird DNA inventory by 2011.

Given the continent's legions of bird specialists, he says he was surprised by the extent of "hidden diversity" revealed in North America, and by the clear DNA distinctions between species.

Dr. Stoeckle cautions that "some pairs of listed species now shown to be DNA twins may be relatively young species and prove different over time." As well, he notes, there is no universal scientific agreement on what defines a species.

Adding six new bat species to the 87 surveyed from Guyana is a surprisingly high percentage, he notes. In all, some 840 bat specimens were barcoded.

"We wanted to give barcoding the toughest test possible. The bats of Guyana have been the subject of intensive taxonomic work and yet we found we could recognize 100 percent of the surveyed species and discovered a number of overlooked bats."

Stray hairs could tell the kind of bats in your belfry -- or which bats are bumping into wind turbines, whose blades whack thousands of the animals each year, he added.

Barcoding can identify a species from bits and pieces. When fully established, the barcode database will help quickly identify undesirable animal or plant material in food and detect regulated species in the marketplace.

Barcoding will help reconstruct food cycles by identifying fragments in stomachs and assist plant science by identifying roots sampled from soil layers. A standardized library of barcodes will enable more people to identify species -- whether abundant or rare, native or invasive -- engendering appreciation of biodiversity locally and globally.

The importance of this work to conservation is particularly critical, adds Dr. Hebert. The Solitary Sandpiper shorebird, its habitat increasingly under pressure from land development and climate change, was not known previously to have two forms, yet their DNA reveals two distinct groups split about 2.5 million years ago.

"How can you develop strategies to preserve highly different genetic entities if you don't know they're there? Our work is providing the first molecular evidence of some of these splits."

The work with birds and bats also helps aviation and is supported in part by the U.S. Federal Aviation Authority and U.S. Air Force.

According to Carla Dove of the Smithsonian Institution: "Knowing which birds are most often struck, and the timing, altitude and routes of their migrations, could avert some of the thousands of annual collisions between birds and aircraft, military and civilian."

In a few years, field researchers, indeed many interested citizens, could employ hand-held DNA devices for nearly instant species identification. Says Dr. Hebert: "For cases where it is not convenient to identify species based on shape, sound and color, even non-experts could identify them based on DNA strings."

Once miniaturized, the many potential uses of quick DNA barcoding embrace food and agriculture, forestry and security, including certification of species for market, controlling pest animals and preventing invasions of species via international trade. A DNA barcoder could name the vegetables in your soup.

Perhaps the biggest surprise is that DNA barcoding works as well as it does, that a relatively short code of genes distinguishes species so clearly and there isn't more blurring between species, says Dr. Stoeckle.

Barcoding has prompted speculation and theories about mechanisms that strip variation out of species and keep them sharply distinct -- periodic "selective sweeps" -- and the reasons behind them.

"This work is raising questions about how evolution works and what species are," he says.

So far, the Barcode of Life Data Systems (www.barcodinglife.org) has catalogued more than 25,000 species of all types, and over 200,000 individual records; both numbers more than doubled in the past year. Whenever possible, museum specimens have been used to create the DNA barcode reference library, enabling scientists to re-check and verify any puzzling results.

The Smithsonian has barcoded an Ivory-billed woodpecker preserved from decades ago, "so if birdwatchers now find a fresh feather, we could strongly confirm the bird still survives," says Dr. Hebert.

"Our job is to reveal how many species there are on the planet and provide really simple tools to tell one species from another."

And difference between Bat and Robin? It depends on the bat in question, but the Vampire Bat, a mammal, and the American Robin, a bird, differ at 135 of the 648 barcode positions, about 10 times the typical difference between a species and its nearest neighbor.

Co-authors of the birds barcode paper: 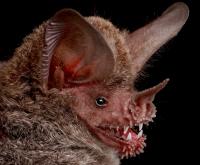 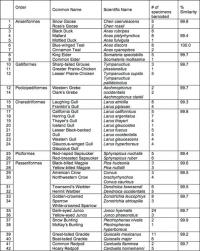