"The brain activity of babies tells us if they recognize a face," explains Dr. Hiroko Ichikawa from Tokyo University of Science, "because babies' hemodynamic responses in the right occipitotemporal area increase when they are viewing a face. In this study, we found that hemodynamic responses to profile faces were weak at 3 months of age, but increased more during the period from 3 to 8 months of age compared with those of frontal faces. Linear regression analysis showed that around 5.5 months of age, babies gradually recognize the profile face."

In 2009, two age groups of babies, 5 and 8 months, had already been tested by Assistant Professor Emi Nakato at Ehime Prefectural University of Health Sciences. She remarked, "Then I had an idea to test the babies from 3 to 8 months of age longitudinally and reveal the developmental course of the neural mechanism related to face recognition during infancy. Actually, we started the study with more babies, but not a few babies we had to give up. Anyway, we greatly appreciate the babies and their families who attended the study patiently every month during the first 3 to 8 months of life."

Team leader Professor Masami K. Yamaguchi at Chuo University emphasized the individual differences among babies. "It is normal that every baby varies in their development in the aspects of speed and time" said Yamaguchi. "We successfully illustrated the individual differences among babies by such a longitudinal study. It cost us a lot; however, it brought us a significant achievement."

Professor Ryusuke Kakigi of the National Institute for Physiological Sciences, National Institutes of Natural Sciences, elaborated on the significance of the findings. "Lately mobile phones have become popular, and we are aware of it every moment" Kakigi said. "Mothers caring for their babies are no exception. However, younger babies do not recognize the face in profile. When we communicate with younger babies, we should look straight at the babies' faces."

The findings are discussed in NeuroImage (available online on Dec. 5, 2018).

Mom, I can't recognize your face from profile view! 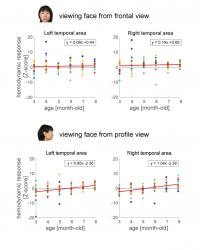