A new study by researchers from the University of Leicester has furthered our understanding of how tiny nanosystems function, unlocking the potential to create new materials using nanosized 'building blocks'.

The study, which has been published in the prestigious academic journal Physical Review Letters, used a novel laser technique to examine in rich detail the structure and internal atomic motion of a small cluster containing an acetylene molecule and a single helium atom.

The technique excited single clusters and generated rotational wavepackets, which are composed of multiple waves illustrating the individual motion of atoms. The team were able to track these wavepackets in real time up to one nanosecond over many rotations.

The wavepacket method used by the team provides greater detail of the structure of clusters than traditional spectroscopic techniques, improving our understanding of small systems and allowing for the creation of new man-made materials in a lab setting.

Gediminas said: "During this project we used a combination of laser beams to excite rotations in small clusters comprising a molecule and a helium atom. We found that the helium atom rotates and vibrates almost freely, occupying nearly the entire volume within the cluster. Hence, the cluster does not have a rigid structure - it behaves rather like a liquid.

"The extension of this technique to other complex systems where weak interactions take place is theoretically possible. The approach may also have the potential for exploring liquids, such as superfluid helium, where the binding forces are similarly sensitive.

"The research was very challenging but also a great opportunity as I could work with scientists from various fields and from different countries."

Using the wavepacket technique, the research team from the University of Leicester's Department of Physics and Astronomy have successfully controlled the rotation and vibration of an acetylene molecule and single helium atom complex without destroying it. The same method could theoretically be applied to other clusters.

Dr Klaus von Haeften, Reader in Nanoscience at the University of Leicester, who supervised the research, said: "This result became possible through the collaboration of an international team of researchers from six different European institutions. The team comprised experts on the generation of rotational wavepackets using lasers, the formation of weakly-bound molecular clusters and theorists to assist the experimentalist in the interpretation of the data.

"This research will enhance our fundamental knowledge of the nanoscale system and can now take many different directions in the fields of physics and chemistry. Ultimately, the knowledge gained through our work will enable the design of novel materials based on nanoscale building blocks. These materials may show entirely new physical properties or catalyse chemical reactions that were otherwise impossible.

"This knowledge is important in enhancing our fundamental understanding of physical principles but also for applications of nanostructures in chemistry."

The work paves the way for future studies of nanoscale systems, allowing for a better understanding of how the properties of materials evolve with size and complexity, such as with an increasing number of atoms added to a cluster.

The study, entitled 'Probing the structure and dynamics of molecular complexes using rotational wavepackets', was published in the academic journal Physical Review Letters on Friday 25 July.

Physical Review Letters is the world's foremost physics letters journal, providing rapid publication of short reports of significant fundamental research in all fields of physics. It is published by American Physical Society. 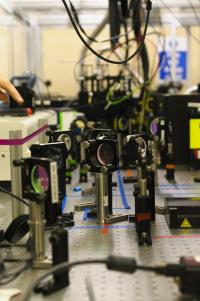 A Section of the Optical Path Setup 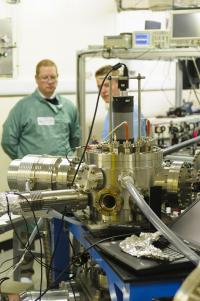