It is the first time for over 60 years that a new Viking fortress is found in Denmark, says curator Nanna Holm of The Danish Castle Centre. Søren Sindbæk, professor of medieval archeology at Aarhus University, explains: "The Vikings have a reputation as a berserker and pirates. It comes as a surprise to many that they were also capable of building magnificent fortresses. The discovery of the new Viking fortress is a unique opportunity to gain new knowledge about Viking war and conflicts, and we get a new chance to examine the Vikings' most famous monuments. " The previously excavated Trelleborg-type fortresses – Fyrkat, Aggersborg and Trelleborg – are nominated for inscription in UNESCO's list of world heritage sites.

It was new, precise laser measurements of the landscape that led curator Nanna Holm on the trail of the fortress. An almost invisible rise in the field was proved by new measurements to have a clear circular outline. Nanna Holm explains: "It is a huge monument. The fortress measures 145m from side to side. We recognize the 'Trelleborg' fortresses by the precise circular shape of the ramparts and by the four massive gates that are directed at the four corners of the compass. Our investigations show that the new fortress was perfectly circular and had sturdy timber along the front; we have so far examined two gates, and they agree exactly with the 'Trelleborg' plan. It is a marvelous find. "

Søren Sindbæk has researched on Viking fortresses for years: "The discovery has been a piece of detective work. We suspected that one fortress was 'missing' in the island Zealand. The location at Vallø was quite the right setting in the landscape: in a place where the old main roads met and reached out to Køge river valley, in the Viking Age was a navigable fjord and one of Zealand's best natural harbors. From there we worked our way forward step by step. "

Together the team called in Helen Goodchild, an expert in archaeological geophysics from the University of York, England. Søren Sindbæk explains: "By measuring small variation in the earth's magnetism we can identify old pits or features without destroying anything. In this way we achieved an amazingly detailed 'ghost image' of the fortress in a few days. Then we knew exactly where we had to put in excavation trenches to get as much information as possible about the mysterious fortress. "

Nanna Holm stresses that the fortress was a real military installation, and probably also the scene of fighting. "We can see that the gates were burned-down; in the north gate we found massive, charred oak posts." She also puts beyond doubt that the fortress belongs to the Viking age. "fortresses constructed in this manner are only known from the Viking Age. The burned wood in the gates will makes it possible to determine the age by means radiocarbon dating and dendrochronology. The samples have been sent, and we will be eager to hear the results. If we can establish exactly when the fortress was built, we may be able to understand the historic events, which the fortress was part of."

Viking fortresses are some of Denmark's most famous monuments. They attract tourists from all over the world, and they have repeatedly rewritten the history of Denmark. For Vallø Estate, which owns the fields where the fortress was discovered, it has been a surprise to learn that there is a large archaeological site on the estate land. Director Søren Boas keenly supports the investigations. "This is a unique monument, which will be of great cultural value for Denmark. We are very happy to support. "Keld Møller Hansen, director of the Museum of Southeast Denmark, which includes the Danish Castle Centre, hope that funds can be gathered for a major research project in collaboration with the University of Aarhus.

The site may prove to be an important discovery in the Viking history of Denmark, says Nanna Holm. "We are eager to establish, if the castle will turn out to be from the time of King Harald Bluetooth, like the previously known fortresses, or perhaps a former king's work. As a military fortification from the Viking Age, the monument may help to unravel the position of Zealand in relation to the oldest Danish kingdom. "

So far, only a small parts of the fortress is excavated. The list of unresolved issues is long, says Søren Sindbæk. "This is really exciting. A find like this does not happen many times in his life-time. The excavation has confirmed far more than we dared hope, but there is much more to learn. The next big question is whether there were large buildings inside the castle, as in the known Trelleborg fortresses. The find also raises the question as to whether there will be more new Viking fortresses to discover. The exploration will be a wonderful journey of discovery. "

Photos from the Excavation (3 of 3) 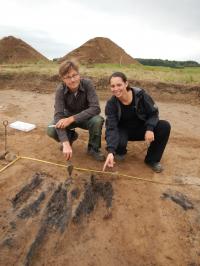 Photos from the Excavation (1 of 3)