Athens, Ga. – Streams that once sang with the croaks, chirps and ribbits of dozens of frog species have gone silent. They're victims of a fungus that's decimating amphibian populations worldwide.

Such catastrophic declines have been documented for more than a decade, but until recently scientists knew little about how the loss of frogs alters the larger ecosystem. A University of Georgia study that is the first to comprehensively examine an ecosystem before and after an amphibian population decline has found that tadpoles play a key role keeping the algae at the base of the food chain productive.

"Many things that live in the stream depend on algae as a base food resource," said lead author Scott Connelly, a doctoral student who will graduate in December from the UGA Odum School of Ecology. "And we found that the system was more productive when the tadpoles were there."

The results, which appear in the early online edition of the journal Ecosystems, demonstrate how the grazing activities of tadpoles help keep a stream healthy. The researchers found that while the amount of algae in the stream was more than 250 percent greater after the amphibian population decline, the algae were less productive at turning sunlight and nutrients into food for other members of the ecosystem. Without tadpoles swimming along the streambed and stirring up the bottom, the amount of sediment in the stream increased by nearly 150 percent, blocking out sunlight that algae need to grow.

The study is part of a larger effort known as the Tropical Amphibian Declines in Streams (TADS) project, which also involves researchers from Southern Illinois University, Drexel University and the University of Alabama. The project is now in its third round of funding by the National Science Foundation and was initiated by Catherine Pringle (UGA Odum School of Ecology) and Karen Lips (Southern Illinois University) in 2000 through a Small Grant for Exploratory Research (SGER) from the NSF. Connelly and Pringle are monitoring in-stream effects of the population decline on algae, while other team members are studying how the loss of frogs impacts other organisms and the transfer of energy between streams and the terrestrial communities that surround them. Preliminary data show that the number of snakes that feed on frogs, for example, has plummeted after the population decline.

"We were there before, during and after the extinction event and were able to look at the ecosystem and measure how it changed," said Pringle, Distinguished Research Professor in the Odum School and study co-author. "Very rarely have scientists been able to do that with respect to any organism."

The chytrid fungus responsible for declines has steadily marched southeast across Costa Rica and through much of Panama like a storm front, killing up to 90 percent of frogs in afflicted streams. In 2003, the team set up research sites on two streams in the pristine and lush highlands of Panama. One study site had already suffered a catastrophic amphibian decline, while the other had a healthy population but, based on its location, was directly in the path of the fungal disease.

In the first stage of their research, Connelly and Pringle assessed ecosystem changes that occur when tadpoles are experimentally excluded from small areas of both the healthy stream and the frogless stream. They found that the absence of the tadpoles resulted in more sediment and less productive algae.

In late 2004, frogs in the formerly healthy stream began dying. The team reassessed the stream and found that impact of the frog die-off was even greater than they had predicted in their exclusion studies. "We predicted the direction of the change," Pringle said, "but underestimated its magnitude."

The UGA research team is continuing to monitor the health of the streams to get valuable, long-term data. So far the stream has not rebounded. "It's still sad going back," Connelly said, to which Pringle added: "Once the frogs die, it's like an incredible silence descends over the whole area. It's eerie."

To date, scientists have not found a way to stop the spread of the fungus in the wild. Broadly applying a fungicide to an entire watershed, Connelly said, would kill beneficial fungi that are necessary for a healthy ecosystem.

But scientists can cure individual frogs in captivity by simply swabbing them with a fungicide. Connelly has worked to protect frogs through Amphibian Ark, a global effort supported by zoos, botanical gardens, aquariums and research institutions that aims to ensure the survival of amphibians by collecting and breeding them. The Atlanta Botanical Garden is one of the key breeding sites.

"The one speck of hope is that if we're able to collect some of these rare animals, we can cure them," Connelly said. "As long as we have the money to keep a breeding program going, in the future it might be possible to reintroduce them into the wild."

Note to editors: For high-resolution photos of the threatened frogs and UGA researcher Scott Connelly, see the links below. Please give photo credit to Scott Connelly/UGA.

Frogs such as this lemur leaf frog are threatened by a fungus that can kill up to 90 percent of amphibians in a stream. http://ugaphoto.alumni.uga.edu/special/frogs-001.jpg

University of Georgia doctoral student Scott Connelly trekked to remote and pristine streams in Panama to study the impact of the chytrid fungus on frogs and stream ecosystems. http://ugaphoto.alumni.uga.edu/special/frogs-003.jpg

Frogs afflicted by the chytrid fungus, such as this brilliant forest frog, often have discolored skin that sloughs off easily. They can become sluggish and drag their back legs behind them. http://ugaphoto.alumni.uga.edu/special/frogs-002.jpg

In some parts of the tropics, frogs are the most abundant land vertebrates. This peculiar-looking casque-headed tree frog is one of the estimated hundreds of species of tropical frogs. http://ugaphoto.alumni.uga.edu/special/frogs-004.jpg 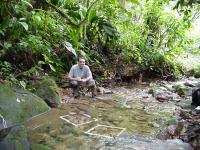