Despite its distance from land, Eugene was causing dangerous ocean swells along the western coast of Baja California on July 10.

Hurricane Eugene formed from a low pressure area that rapidly developed into a tropical storm on Friday, July 7, around 5 p.m. EDT (2100 UTC).

On Sunday, July 9, at 8 a.m. EDT (1200 UTC) NOAA's GOES-West infrared satellite imagery revealed an eye as the storm reached Category 2 status on the Saffir-Simpson Hurricane Wind Scale. Eugene as located about 565 miles (185 km) southwest of the southern tip of Baja California, Mexico, at the time.

It was another eye-opening experience at 2:15 p.m. EDT (1815 UTC) when the Moderate Resolution Imaging Spectroradiometer or MODIS instrument aboard NASA's Terra satellite captured visible-light image of a clear-eyed Hurricane Eugene. The image showed powerful, high thunderstorms surrounding an eye and cloud tops colder than minus 94 degrees Fahrenheit (minus 70 degrees Celsius) had at times completely encircled the eye. When Terra passed overhead Eugene had already intensified further into a Category 3 hurricane on the Saffir-Simpson Hurricane Wind Scale, packing maximum sustained winds near 115 mph (185 kph).

The Visible Infrared Imaging Radiometer Suite (VIIRS) instrument aboard NASA-NOAA's Suomi NPP satellite captured a visible light image of Tropical Storm Eugene off the western coast of Mexico on July 9 at 4:30 p.m. EDT (20:30 UTC). The image showed that the eye was becoming cloud-filled. Six and a half hours later at 11 p.m. EDT the National Hurricane Center noted that the strengthening trend of Eugene appeared to have ended. The eye of the hurricane had become cloud-filled and ragged, and the convection in the eyewall is not quite as symmetric as it was earlier on July 9.

NHC forecaster Chris Landsea noted in the 11 a.m. EDT discussion that swells generated by Eugene are affecting portions of the west coast of the Baja California peninsula and will spread northward to portions of southern California by tonight and Tuesday (July 11). These swells are likely to cause life-threatening surf and rip current conditions.

The center of Hurricane Eugene was located near 18.7 degrees north latitude 18.7 and 117.2 degrees west longitude. That's about 555 miles (890 km) west-southwest of the southern tip of Baja California. Eugene was moving toward the northwest near 10 mph (17 kph) and this motion is expected to continue during the next couple of days.

Maximum sustained winds have dropped to near 85 mph (140 kph) with higher gusts. Continued weakening is forecast during the next 48 hours. Eugene is expected to become a tropical storm by Tuesday and a remnant low by Wednesday, July 12. 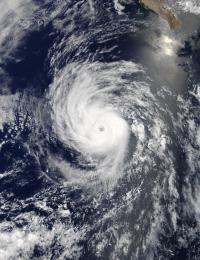