Is it a case of nature versus nurture when it comes to two "cousin" exoplanets? In a unique experiment, scientists used NASA's Hubble Space Telescope to study two "hot Jupiter" exoplanets. Because these planets are virtually the same size and temperature, and orbit around nearly identical stars at the same distance, the team hypothesized that their atmospheres should be alike. What they found surprised them.

Lead researcher Giovanni Bruno of the Space Telescope Science Institute in Baltimore, Maryland, explained, "What we're seeing in looking at the two atmospheres is that they're not the same. One planet -- WASP-67 b -- is cloudier than the other -- HAT-P-38 b. We don't see what we're expecting, and we need to understand why we find this difference."

The team used Hubble's Wide Field Camera 3 to look at the planets' spectral fingerprints, which measure chemical composition. "The effect that clouds have on the spectral signature of water allows us to measure the amount of clouds in the atmosphere," Bruno said. "More clouds mean that the water feature is reduced." The teams found that for WASP-67 b there are more clouds at the altitudes probed by these measurements.

"This tells us that there had to be something in their past that is changing the way these planets look," said Bruno.

Today the planets whirl around their yellow dwarf stars once every 4.5 Earth days, tightly orbiting their stars closer than Mercury orbits our sun. But in the past, the planets probably migrated inward toward the star from the locations where they formed.

Perhaps one planet formed differently than the other, under a different set of circumstances. "You can say it's nature versus nurture," explains co-investigator Kevin Stevenson. "Right now, they appear to have the same physical properties. So, if their measured composition is defined by their current state, then it should be the same for both planets. But that's not the case. Instead, it looks like their formation histories could be playing an important role."

The clouds on these hot, Jupiter-like gas giants are nothing like those on Earth. Instead, they are probably alkali clouds, composed of molecules such as sodium sulfide and potassium chloride. The average temperature on each planet is more than 1,300 degrees Fahrenheit.

The exoplanets are tidally locked, with the same side always facing the parent star. This means they have a very hot day-side and a cooler night-side. Instead of sporting multiple cloud bands like Jupiter does, each probably has just one broad equatorial band that slowly moves the heat around from the day-side to the night-side.

The team is just beginning to learn what factors are important in making some exoplanets cloudy and some clear. To better understand what the planets' pasts may have been, scientists will need future observations with Hubble and the soon-to-be-launched James Webb Space Telescope.

The team's results were presented on June 5 at the 230th meeting of the American Astronomical Society in Austin, Texas. 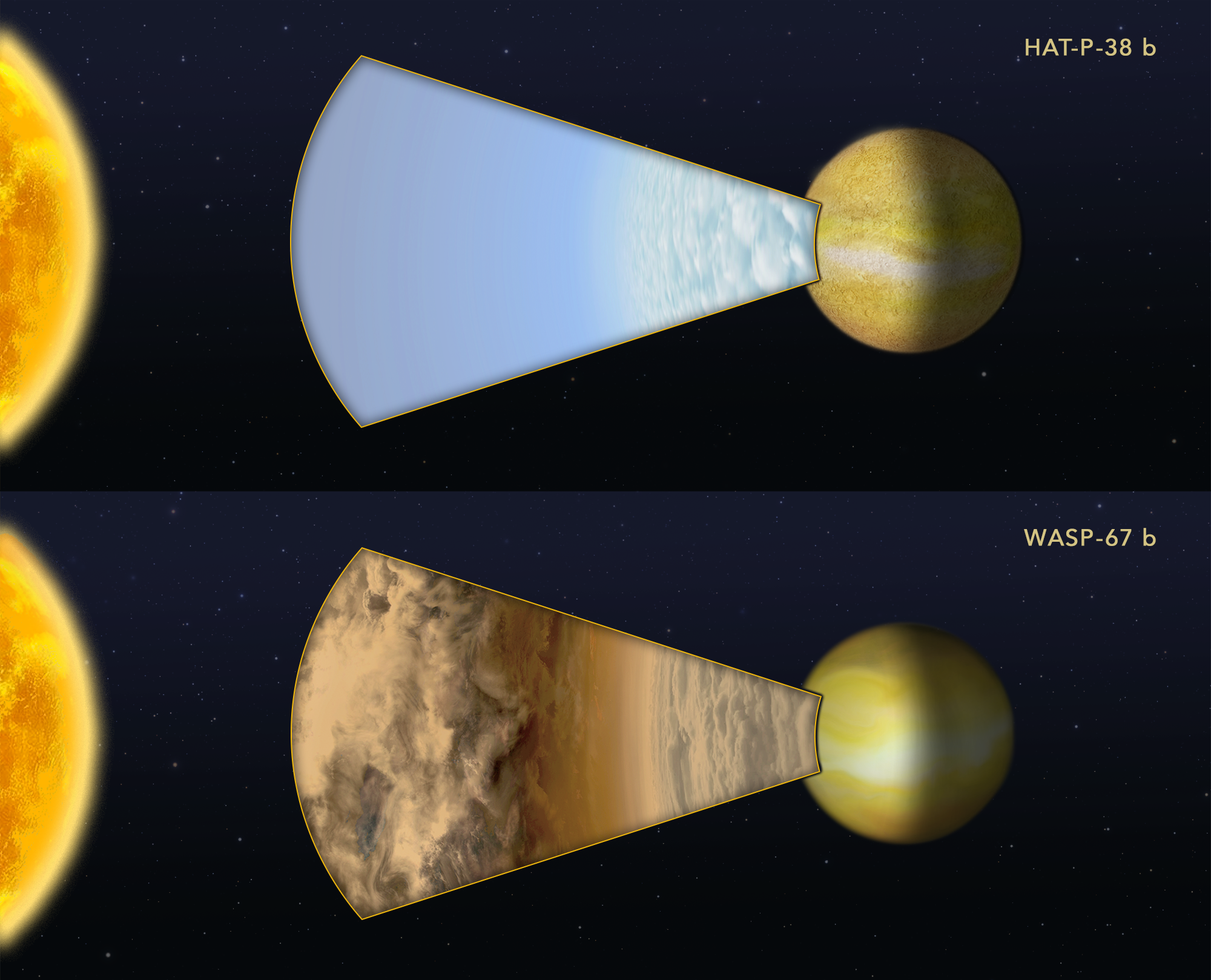 A Take of two Exoplanets