A scientist from The Australian National University (ANU) is helping set up an international network to use surveillance camera networks and drone data to spy on trees.

The network will help make huge amounts of time-lapse image data accessible for scientists trying to understand how climate change will affect forests around the world.

Dr Tim Brown has helped launch the Australian Phenocam Network after collaborating with similar networks in North America and Europe.

"We can use the data to build a virtual version of a forest that holds the personal data and history of every tree," said Dr Brown, a research fellow with the ANU Centre of Excellence in Plant Energy Biology.

"It's a bit like star trek. Researchers walking through a forest could use a tablet or augmented reality to view sensor data layered onto the actual trees."

Rapid change in technology has made it possible to cheaply deploy lots of cameras and generate vast coverage, Dr Brown said.

"This complexity of data is needed to crack really serious environmental issues," he said.

"However, until recently it was hard to use these new technologies well unless you were a total geek. You get a huge pile of data that can be really hard to make sense of."

Dr Brown is harnessing gaming technology to organise the huge quantities of data that are produced by surveillance cameras and other sensors into easily accessible formats.

"They can visit a forest on the other side of the world in virtual reality, or for under $100 build their own time-lapse camera and use our software to monitor the environment at their school."

Dr Brown has already teamed up with students from ANU Department of Computer Science to build a virtual reality version of the National Arboretum in Canberra, where a "gigapixel" camera records hourly panoramas along with data from sensors on 20 trees in different locations.

"You can see the microclimate for the trees at the top of the hill, which is different to the bottom of the hill, record the daily water, sun and frost and see when the leaves turn http://phenocam.anu.edu.au/media/2016/phenocam/2016-03-FEECoverTimBrown.jpg colour or fall," Dr Brown said.

"You can also build timelapse videos of forests or individual trees, which show the overall gradual change at a speed that the human eye is good at seeing."

An example of Dr Brown's work, a panorama of North Canberra taken from Black Mountain, showing the contrast between spring and autumn colours was selected as the cover for the March 2016 issue of the Journal Frontiers in Ecology, in which his research is published. 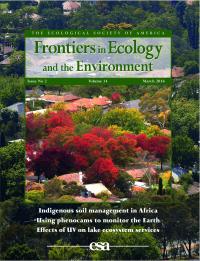