NASA's Aqua satellite provided an infrared view of Hurricane Willa as it continued moving toward landfall in western Mexico on Oct. 23. NASA-NOAA's Suomi NPP satellite provided a visible look at the extent and structure of the storm. Willa is expected to bring life-threatening storm surge, wind, and rainfall to portions of west-central and southwestern Mexico.

The National Hurricane Center noted "While gradual weakening is forecast today, Willa is expected to be a dangerous hurricane when it reaches the coast of Mexico. Rapid weakening is expected after landfall tonight and continuing into Wednesday (Oct. 24).

On the forecast track, the center of Willa will make landfall within the hurricane warning area along the west-central coast of mainland Mexico this evening." 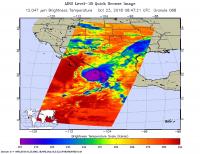