By clearing forests, burning grasslands, plowing fields and harvesting crops, humans apply strong selective pressures on the plants that survive on the landscapes we use. Plants that evolved traits for long-distance seed-dispersal, including rapid annual growth, a lack of toxins and large seed generations, were more likely to survive on these dynamic anthropogenic landscapes. In the current article, researchers argue that these traits may have evolved as adaptations for megafaunal mutualisms, later allowing those plants to prosper among increasingly sedentary human populations.

The new study hypothesizes that the presence of specific anthropophilic traits explains why a select few plant families came to dominate the crop and weed assemblages around the globe, such as quinoa, some grasses, and knotweeds. These traits, the authors argue, also explain why so many genera appear to have been domesticated repeatedly in different parts of the world at different times. The 'weediness' and adaptability of those plants was the result of exaptation traits, or changes in the function of an evolutionary trait. In this way, rather than an active and engaged human process, certain plants gradually increased in prominence around villages, in cultivated fields, or on grazing land.

Grasses and field crops weren't the only plants to use prior adaptations to prosper in human landscapes; select handfuls of trees also had advantageous traits, such as large fleshy fruits, resulting from past relationships with large browsers. The rapid extinction of megafauna at the end of the Pleistocene left many of these large-fruiting tree species with small, isolated populations, setting the stage for more dramatic changes during later hybridization. When humans began moving these trees they were likely to hybridize with distant relatives, resulting, in some cases, in larger fruits and more robust plants. In this way, the domestication process for many long-generation perennials appears to have been more rapid and tied into population changes due to megafaunal extinctions.

"The key to better understanding plant domestication may lay further in the past than archaeologists have previously thought; we need to think about the domestication process as another step in the evolution of life on Earth, as opposed to an isolated phenomenon," states Dr. Robert Spengler. He is the director of the archaeobotanical laboratories at the Max Planck Institute for the Science of Human History in Jena, Germany, and the lead investigator on this paper.

This publication is a result of archaeologists, geneticists, botanists, and paleontologists contributing insights from their unique disciplines to reframe the way scholars think about domestication. The goal of the collaboration is to get researchers to consider the deeper ecological legacies of the plants and the pre-cultivation adaptations that they study.

Prof. Nicole Boivin, director of the Department of Archaeology at the Max Planck Institute in Jena, studies the ecological impacts of humans deep in the past. "When we think about the ecology of the origins of agriculture, we need to recognize the dramatic changes in plant and animal dynamics that have unfolded across the Holocene, especially those directly resulting from human action," she adds.

Ultimately, the scholars suggest that, rather than in archaeological excavations, laboratories, or in modern agricultural fields, the next big discoveries in plant domestication research may come from restored megafaunal landscapes. Ongoing research by Dr. Natalie Mueller, one of the authors, on North American restored prairies is investigating potential links between bison and the North American Lost Crops. Similar studies could be conducted on restored megafaunal landscapes in Europe, such as the Bia?owieski National Park in Poland, the Ust'-Buotoma Bizon Park or Pleistocene Park in Sakha Republic, Russia.

Dr. Ashastina, another author on the paper and a paleontologist studying Pleistocene vegetation communities in North Asia, states, "these restored nature preserves provide a novel glimpse deep into the nature of plant and animal interactions and allow ecologists, not only to directly trace vegetation changes occurring under herbivore pressure in various ecosystems, but to disentangle the deeper legacies of these mutualisms."

Ancient megafaunal mutualisms and extinctions as factors in plant domestication 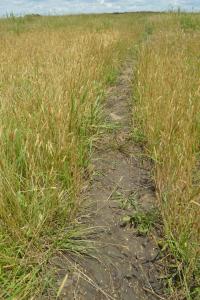 Little barley, one of the North American Lost Crops