An invasive ant species that has become increasingly abundant in eastern North America not only takes over yards and delivers a nasty sting, it's helping the spread of an invasive plant species. The ants are very effective dispersers of invasive plant seeds and new research suggests that together they could wreak havoc on native ecosystems.

University of Toronto researchers have found that the European fire ant, Myrmica rubra, disperses seeds of both native and invasive plants, but it does a much better job of helping an invasive plant to spread.

"Ecologists think invasive species might help each other to spread, but there are few good examples. They talk about 'invasional meltdown,' because ecosystems could be very, very rapidly taken over by invasive species if invaders help each other out," said evolutionary biologist Megan Frederickson, one of the authors of the study, to be published December 24 in the journal Proceedings of the Royal Society B. "Our results suggest that invasional meltdown could be happening right under our noses, here in Ontario."

The researchers filled each pool with soil and planted four species of spring wildflowers - three native species (sharp-lobed hepatica, Canadian wild ginger and bloodroot) and one invasive species: greater celandine. They then collected colonies of either the European fire ant or a native woodland ant and added the colonies to the pools. The ants picked up and moved seeds of these plant species and the researchers watched what happened.

"Unfortunately, as a result of humans rapidly moving species around the globe through trade and traffic, most ecosystems are now home to numerous invasive species," said Prior. "Our finding that multiple invasive species can accelerate invasion and cause ecosystems to become dominated by invasive species is a troubling one. Invasive species are a leading threat to natural ecosystems, and can have impacts on society. Research on how ecosystems become invaded and the consequences of invasion is important. It sets us on the right path to develop solutions to reduce the spread and impact of these harmful species."

Other research team members included undergraduate students Jennifer Robinson and Shannon Meadley Dunphy. Research was funded by the Natural Sciences and Engineering Research Council and the Ontario Ministry of Economic Development and Innovation.

Images and paper at uoft.me/invasive-species

Kirsten Prior
Department of Biology
University of Florida
priorkm@gmail.com
priorkm.weebly.com
Cell/Mobile: + 254-202- 639-251 * Kirsten is in Kenya . Note that Kenya is 8 hours ahead of Toronto time. 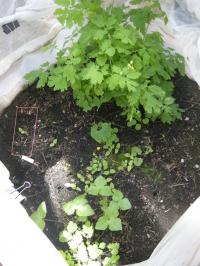 Ant Species Had Large Effects on Plant Communities in Mecosms