Satellite imagery shows that Jose is a large storm, with a large reach. NASA's Aqua satellite captured cloud top temperatures of Tropical Storm Jose that revealed the strongest storms were in the northeastern part of the tropical cyclone but the storm is so large that it is causing dangerous ocean conditions from Bermuda to the U.S. East coast.

Tropical-storm-force winds extend outward up to 205 miles (335 km) from the center. Despite the strongest side facing away from the coast, dangerous surf and rip currents expected to continue for several more days along much of the east coast of the United States.

On Sept. 20, a Tropical Storm Warning is in effect for Woods Hole to Sagamore Beach, including Cape Cod, Massachusetts, Block Island, Martha's Vineyard and Nantucket Island.

The Moderate Resolution Imaging Spectroradiometer or MODIS instrument that flies aboard NASA's Aqua satellite captured infrared data on Tropical Storm Jose on Sept. 20 at 2:55 a.m. EDT (0655). Infrared data provides temperature information to scientists. Cloud top temperatures are an important factor when it comes to determining the strength of storms. The higher the cloud tops, the colder and the stronger the storms.

The MODIS data showed that the coldest cloud tops were colder than minus 50 degrees Fahrenheit (minus 45.5 degrees Celsius). Those storms were found northeast of the center of circulation. Cloud top temperatures around the rest of the circulation were warmer indicating weaker storms. Clouds associated with Jose stretched from North Carolina up to Nova Scotia, Canada.

The National Hurricane Center noted "Although Jose does not have a purely tropical appearance, it still has a warm core and well-defined convective bands, especially to the north of the center. "

At 11 a.m. EDT (1500 UTC), the center of Tropical Storm Jose was located near 39.0 degrees north latitude and 70.0 degrees west longitude. That puts Jose's center about 150 miles (245 km) south of Nantucket Island, Massachusetts. Jose was moving toward the northeast near 8 mph (13 kph), and this general motion with a decrease in forward speed is expected to continue through tonight. Maximum sustained winds are near 70 mph (110 kph) with higher gusts. Gradual weakening is forecast during the next couple of days. The minimum central pressure based on data from the Air Force Hurricane Hunters is 976 millibars.

The National Hurricane Center forecasts a slow westward motion to begin on Thursday, Sept. 21. On the forecast track, the center of Jose is expected to pass well to the east of the New Jersey coast today, and pass offshore of southeastern Massachusetts on Thursday.

NHC said Jose is expected to produce additional rainfall accumulations of 1 to 2 inches over Martha's Vineyard and Cape Cod, and 2 to 4 inches in Nantucket as it passes offshore today into Thursday. This rainfall could cause isolated flash flooding.

NASA gets an infrared view of large Tropical Storm Jose 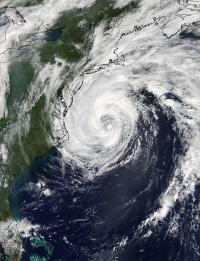