Thirteen billion years ago our universe was dark. There were neither stars nor galaxies; there was only hydrogen gas left over after the Big Bang. Eventually that mysterious time came to an end as the first stars ignited and their radiation transformed the nearby gas atoms into ions. This phase of the universe's history is called the Epoch of Reionization (EoR), and it is intimately linked to many fundamental questions in cosmology. But looking back so far in time presents numerous observational challenges. Arizona State University's Judd Bowman and Alan Rogers of Massachusetts Institute of Technology have developed a small-scale radio astronomy experiment designed to detect a never-before-seen signal from the early universe during this period of time, a development that has the potential to revolutionize the understanding of how the first galaxies formed and evolved.

"Our goal is to detect a signal from the time of the Epoch of Reionization. We want to pin down when the first galaxies formed and then understand what types of stars existed in them and how they affected their environments," says Bowman, an assistant professor at the School of Earth and Space Exploration in ASU's College of Liberal Arts and Sciences.

Bowman and Rogers deployed a custom-built radio spectrometer called EDGES to the Murchison Radio-astronomy Observatory in Western Australia to measure the radio spectrum between 100 and 200 MHz. Though simple in design – consisting of just an antenna, an amplifier, some calibration circuits, and a computer, all connected to a solar-powered energy source – its task is highly complex. Instead of looking for early galaxies themselves, the experiment looks for the hydrogen gas that existed between the galaxies. Though an extremely difficult observation to make, it isn't impossible, as Bowman and Rogers have demonstrated in their paper published in Nature on Dec. 9.

"This gas would have emitted a radio line at a wavelength of 21 cm – stretched to about 2 meters by the time we see it today, which is about the size of a person," explains Bowman. "As galaxies formed, they would have ionized the primordial hydrogen around them and caused the radio line to disappear. Therefore, by constraining when the line was present or not present, we can learn indirectly about the first galaxies and how they evolved in the early universe." Because the amount of stretching, or redshifting, of the 21 cm line increases for earlier times in the Universe's history, the disappearance of the inter-galactic hydrogen gas should produce a step-like feature in the radio spectrum that Bowman and Rogers measured with their experiment.

Radio measurements of the redshifted 21 cm line are anticipated to be an extremely powerful probe of the reionization history, but they are very challenging. The experiment ran for three months, a rather lengthy observation time, but a necessity given the faintness of the signal compared to the other sources of emission from the sky.

"We carefully designed and built this simple instrument and took it out to observe the radio spectrum and we saw all kinds of astronomical emission but it was 10,000 times stronger than the theoretical expectation for the signal we are looking for," explains Bowman. "That didn't surprise us because we knew that going into it, but it means it's very hard to see the signal we want to see."

The low frequency radio sky is dominated by intense emission from our own galaxy that is many times brighter than the cosmological signal. Add to that the interference from television, FM radio, low earth orbit satellites, and other telecommunications radio transmitters (present even in remote areas like Australia's Outback) and it is a real challenge. Filtering out or subtracting these troublesome foreground signals is a principal focus of instrument design and data analysis techniques. Fortunately, many of the strongest foregrounds have spectral properties that make them possible to separate from the expected EoR signals.

After careful analysis of their observations, Bowman and Rogers were able to show that the gas between galaxies could not have been ionized extremely rapidly. This marks the first time that radio observations have directly probed the properties of primordial gas during the EoR and paves the way for future studies. "We're breaking down barriers to open an entirely new window into the early universe," Bowman says.

The next generation of large radio telescopes is under construction right now to attempt much more sophisticated measurements of the 21 cm line from the EoR. Bowman is the project scientist for one of the telescopes called the Murchison Widefield Array. According to him, the most likely physical picture for the EoR looked like a lot of bubbles that started percolating out from galaxies and then grew together – but that idea needs to be tested. If lots of galaxies all put out a little bit of radiation, then there would be many little bubbles everywhere and those would grow and eventually merge like a really fizzy and frothy foam. On the other hand, if there were just a few big galaxies that each emitted a lot of radiation then there would have been only a few big bubbles that grew together.

"Our goal, eventually, is to make radio maps of the sky showing how and when reionization occurred. Since we can't make those maps yet, we are starting with these simple experiments to begin to constrain the basic properties of the gas and how long it took for galaxies to change it," explains Bowman. "This will improve our understanding of the large-scale evolution of the universe."

Photo 1: EDGES is a radio spectrometer operating at the Murchison Radio-astronomy Observatory custom-built by ASU Assistant Professor Judd Bowman and his colleague Alan Rogers of Massachusetts Institute of Technology. EDGES recent results mark the first time that radio observations have directly probed the properties of primordial gas during the Epoch of Reionization. Photo credit: Judd Bowman.

Photo 2: Bowman attaches the coaxial cable to the first-stage analog receiver electronics (the receiver is the metal box). The cable runs from the computer housed inside the hut to the receiver, which is located under the antenna. Photo courtesy: Judd Bowman. 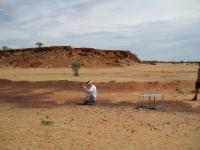