WASHINGTON D.C. Nov. 14, 2013 -- Back in 1991, Nature published a picture from the IMAX movie Antarctica, along with the caption: "Emperor penguins may be waddling jokes on land, but underwater they can turn into regular rockets…accelerating from 0 to 7 m/s in less than a second."

That's all it took to inspire Flavio Noca, who at the time was a graduate student in Caltech's Aeronautics Department, and now teaches aerodynamics at the University of Applied Sciences Western Switzerland (hepia) and the Swiss Federal Institute of Technology (EPFL), to explore leveraging penguins' "rocket" properties to create new propulsion technologies with high maneuverability and improved hydrodynamic efficiency.

Based on a penguin's shoulder-and-wing system, the mechanism features a spherical joint that enables three degrees of freedom and a fixed center of rotation. "Unlike an animal shoulder joint, however, this spherical joint enables unlimited rotational range about the main shaft axis like a propeller," Noca said.

To achieve this they needed to overcome the technical challenges of spherical joints, such as the lack of rigidity and the inability to generate high torques. To understand the challenge involved, just try lifting a 10-pound weight on your hand with your arm extended.

The researchers maneuvered around these challenges by choosing a parallel robotic architecture for this type of mechanism, because it enables rigidity as well as high actuation frequencies and amplitudes.

"Because the motors are fixed, inertial forces are lower than for a serial robotic mechanism, such as a multi-joint arm," explains Noca. "The resulting spherical parallel mechanism with coaxial shafts was designed and manufactured with these specifications: a fixed center of rotation (spherical joint), a working frequency of ~2.5 Hz under charge, an unlimited rotation about the main axis, and an arbitrary motion within a cone of +/- 60°."

The manner in which penguins swim is still poorly understood, aside from the technological perspective, according to Noca. "By accurately reproducing an actual penguin wing movement, we hope to shed light on the swimming mysteries of these underwater rockets," he said.

Any credentialed journalist, full-time or freelance, may attend the conference free of charge. Please email: dfdmedia@aps.org and include "DFD Press" in the subject line. Work space will be provided on-site during the meeting and news and graphics will be hosted on the Virtual Press Room: http://www.aps.org/units/dfd/pressroom/press.cfm

ABOUT THE APS DIVISION OF FLUID DYNAMICS

The Division of Fluid Dynamics of the American Physical Society (APS) exists for the advancement and diffusion of knowledge of the physics of fluids with special emphasis on the dynamical theories of the liquid, plastic and gaseous states of matter under all conditions of temperature and pressure. DFD Website: http://www.aps.org/units/dfd/index.cfm 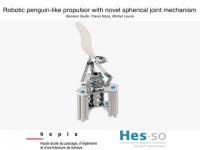