This press release is available in Chinese, French, Japanese and Spanish.

Researchers in Texas have discovered thousands of human artifacts in a layer of earth that lies directly beneath an assemblage of Clovis relics, expanding evidence that other cultures preceded the Clovis culture in North America. This pre-Clovis toolkit appears to be between 13,200 and 15,500 years old and it includes biface and blade technology that may have later been adapted—and improved upon—by the Clovis culture.

The Clovis people, whose tools were known for their distinctive "fluted" points, were once thought to be the original settlers of North America about 13,000 years ago. Over the past few years, however, scattered evidence has hinted at several earlier cultures. But, such evidence has often been disputed in part because so few artifacts have actually been recovered.

The new site in Texas, known as the Debra L. Friedkin site, documents a pre-Clovis settlement in the region and informs researchers about the transition to Clovis culture and technology, which is later seen across North and Central America (and also into northern South America). These new artifacts comprise what researchers are calling the Buttermilk Creek Complex, and details of its excavation will be reported in the 25 March issue of Science, which is published by AAAS, the nonprofit science society.

Michael Waters from Texas A&M University and colleagues from across the United States describe the various blades, scrapers and choppers found among the 15,528 artifacts in the Buttermilk Creek Complex. They used luminescence dating, which measures the light energy trapped in sediment grains, to date the 20-centimeter thick layer of sediment surrounding the toolkit.

"At the Debra L. Friedkin site, Texas, we have found evidence of an early human occupation… 2,500 years older than Clovis," said Dr. Waters. "This makes the Friedkin site the oldest credible archaeological site in Texas and North America. The site is important to the debate about the timing of the colonization of the Americas and the origins of Clovis."

The newly discovered tools are small and made of chert, and the researchers suggest that they were designed for a mobile toolkit—something that could be easily packed up and moved to a new location. These tools are recognizably different from Clovis tools although they do share some similarities, including the use of biface and bladelet technology.

In the past, researchers have argued that the Clovis people were the oldest human inhabitants of the Americas. This "Clovis First" model theorizes that the Clovis people came to the New World from Northeast Asia by crossing the Bering Land Bridge, which once connected Asia and North America. From there, it suggests that they spread out across the continent and eventually made their way down to South America.

However, some problems with this model have recently arisen. First of all, no Clovis technology has been found in Northeast Asia and the fluted points that have been discovered in Alaska are all too young to be Clovis. (They were also made a bit differently than Clovis points.) Furthermore, there are six sites in South America that do not contain Clovis technology, although they did exist during the same time period.

The Debra L. Friedkin site in Texas, implies that Clovis tools could have eventually evolved from the tools found in the Buttermilk Creek Complex—and that the Clovis culture, including the use of fluted points, likely developed in North America.

"This discovery provides ample time for Clovis to develop," said Waters. "People [from the Buttermilk Creek Complex] could have experimented with stone and invented the weapons and tools that we now recognize as Clovis… In short, it is now time to abandon once and for all the 'Clovis First' model and develop a new model for the peopling of the Americas." 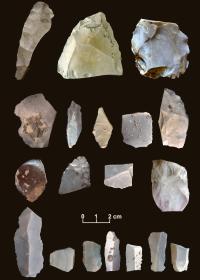