"Recent research has used new technologies to identify genes and pathways related to neuroinflammation as part of alcohol's action on addiction processes," said Bergeson, associate professor in the TTUHSC Department of Pharmacology and Neuroscience. "Minocycline, a tetracycline antibiotic normally used against bacterial infections, has known anti-inflammatory actions and recently was shown to reduce alcohol consumption."

In research described in four companion papers published by the journal Alcoholism: Clinical and Experimental Research, the teams first reported the screening of several tetracycline drugs to see if all were effective in reducing alcohol use. The results pointed to a specific structural component of the drugs as responsible for positive outcomes and led to the discovery that tigecycline, a minocycline analog, was highly effective in reducing binge and chronic consumption, in both dependent and non-dependent animals.

In addition, withdrawal seizures, which represent a medical emergency in humans, also were reduced in mice by tigecycline. Finally, binge drinking was shown to cause a persistent change in pain perception, which was reduced in males, but not females, by tigecycline. The Bergeson, Finn, Guindon and Syapin labs' research lead to the conclusion that tigecycline, already approved by the FDA for use in humans for Methicillin-resistant Staphylococcus aureus or MRSA infections, may be a good lead drug for the effective reduction of alcohol drinking, withdrawal symptoms and pain.

"We have known that high levels of alcohol consumption can cause damage to the liver and brain, but it has been more difficult to understand how AUD is cemented," said Bergeson. "Every person knows a family member or close friend that struggles with AUD, and now with these findings, a simple antibiotic that is already FDA approved could help."

TTUHSC Researchers Find Antibiotic May Help in Treatment of AUD 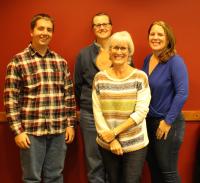