Scientists from the National Centre for radio Astrophysics of the Tata Institute of Fundamental Research (NCRA-TIFR) Pune used the upgraded Giant Metrewave Radio Telescope (uGMRT) to determine that AT 2018 cow, the first of a newly discovered class of cosmic explosions, has an extremely patchy environment. Sources like AT 2018cow release an enormous amount of energy, nonetheless fade extremely rapidly. This along with their extremely blue color has led to them being called FBOTs for Fast Blue Optical Transient. This is the first observational evidence of inhomogeneous emission from an FBOT. The origins of FBOTs are still under debate, but proposed models include explosion of a massive star, collision of an accreting neutron star and a star, merger of two white dwarfs, etc.

The FBOTs are difficult to find since they appear and vanish in the sky very quickly. However, several of them have been discovered in the past few years via the recent advent of surveys that scan the sky almost on daily basis. FBOTs that also emit in the radio are doubly rare, but are particularly interesting because radio observations help one to determine the properties of the environments of these explosions and their progenitors.

The FBOT AT 2018cow was discovered on 16 June 2018. At a distance of about 215 million light-years, the "cow" showed luminosities much greater than that of normal supernovae. Prof. Poonam Chandra (NCRA-TIFR) and Dr. A. J. Nayana (a former Ph.D. student of Prof. Poonam Chandra) carried out radio observations of AT 2018cow with the uGMRT to determine the properties of its extended environment and emission region. "Our study has tremendously benefited by the unique low-frequency capabilities of the uGMRT. The uGMRT observations of the "cow" played an unique role in finding the non-uniform density around this explosion", says Nayana. She added, "Our work provides the first observational evidence of inhomogeneous emission from an FBOT. The density of the material around this explosion falls drastically around 0.1 light-year from the transient. This indicates that the progenitor star of AT 2018cow was shedding mass much faster towards its end of life."

AT 2018cow is also unusual in that it has been observable in the radio for a very long time. The longer one can observe the post explosion emission, the more distance the material that was ejected during the explosion has traveled. This allows one to study the large scale environment of the source. Dr. A. J. Nayana and Prof. Poonam Chandra have been observing the "cow" for ~ 2 years with the uGMRT to understand its properties. "This is the first FBOT seen for this long at low radio frequencies and the uGMRT data gave crucial information about the environment of this transient.", Nayana said. Poonam Chandra explains, "This is the beauty of low-frequency radio observations. One gets to trace the footprints of the progenitor system much before it exploded. It is interesting that the material from the explosion is moving with speed greater than 20% speed of light even after ~257 days post-explosion, without any deceleration".

While the origin of FBOTs is still under debate, detailed radio observations can give hints about various physical parameters of these events like the speed of the material that came out of this explosion, the magnetic field strength, the rate by which the progenitor system sheds its mass before the explosion, etc. The uGMRT observations of the "cow" suggest that the progenitor erupted its material ~100 times faster during the years close to its end-of-life compared to ~23 years before the explosion. Also, AT 2018cow showed inhomogeneities in the radio-emitting region whereas the other two radio bright FBOTs did not show these properties, making the "cow" unique in the group. "Observations of more FBOTs with the uGMRT will give information about their environments and progenitors to develop a comprehensive picture of the properties of these intriguing transients.", says Nayana.

The GMRT is an array of thirty 45-m antennas spread over 25 sq-km area in Khodad village, Narayangaon, India, built and operated by NCRA-TIFR, Pune. Currently it is one of the most sensitive low frequency radio telescope in the world.

The paper was published in the April 30, 2021 issue of The Astrophysical Journal Letters. 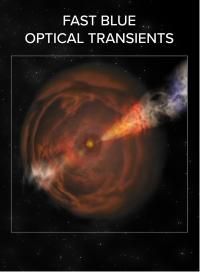 An Artists conception of FBOT 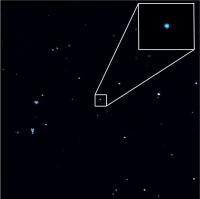