Neutrinos and their small non-zero masses play a key role in cosmology and particle physics. The allowed range of the mass scale has now been narrowed down by the initial results of the international Karlsruhe Tritium Neutrino Experiment (KATRIN). The analysis of a first four-week measurement run in spring 2019 limits neutrino masses to less than approximately 1 eV, which is smaller by a factor of 2 compared to previous laboratory results based on multi-year campaigns. This demonstrates the huge potential of KATRIN in elucidating novel properties of neutrinos over the coming years.

Apart from photons, the fundamental quanta of light, neutrinos are the most abundant elementary particles in the universe. The observation of neutrino oscillations two decades ago proved that they possess a small non-zero mass, contrary to earlier expectations. Accordingly, the "light-weights of the universe" play a prominent role in the evolution of large-scale structures in the cosmos as well as in the world of elementary particles, where their small mass scale points to new physics beyond known theories. Over the coming years, the most precise scale of the world, the international KATRIN experiment located at the Karlsruhe Institute of Technology (KIT), is set to measure the mass of the fascinating neutrinos with unprecedented precision.

In the past years, the KATRIN collaboration, formed by 20 institutions from 7 countries, successfully mastered many technological challenges in the commissioning of the 70 m long experimental setup (see Fig. 1). In mid-2018, KATRIN reached an important milestone with the official inauguration of the beamline. In spring this year, the big moment finally arrived: the 150-strong team (see Fig. 2) was able to "put neutrinos on the ultra-precise scale of KATRIN" for the first time. To that end, high-purity tritium gas was circulated over weeks through the source cryostat, and high statistics energy spectra of electrons were collected. Following this, the international analysis team went to work on extracting the first neutrino mass result from the spring 2019 measurement campaign.

KATRIN's current result builds upon years of effort, which established a data-processing framework, identified and constrained key backgrounds and sources of uncertainty, and constructed a comprehensive model of the instrumental response. Through simulations and test measurements, an international team of analysts gained a deep understanding of the experiment and its detailed behavior. In spring 2019, both hardware and analysis groups were ready for taking neutrino mass data. Thierry Lasserre (CEA, Frankreich, Max Planck Institute for Physics, Munich), analysis coordinator for this first measurement campaign, described what happened as the data came in: "Our three international analysis teams deliberately worked separately from each other to guarantee truly independent results. In doing so, special emphasis was put on securing that no team member was able to prematurely deduce the neutrino mass result before completion of the final analysis step."

As is customary in today's precision experiments, vital additional information required to complete the analysis was veiled, a process known to specialists as "blinding." To coordinate their final steps, the analysts met for a one-week workshop at KIT in mid-July. By late evening on July 18, the uncertainties were finalized and the spectral models were unblinded. As a result, the analysis programs simultaneously performed overnight fits to search for the tell-tale signature of a massive neutrino. The following morning, all three groups announced identical results, which limit the absolute mass of neutrinos to a value of less than 1 electron-volt (eV) at 90% confidence. Thus, half a million of the neutrinos weigh less than one electron, the second lightest elementary particle.

The two long-term co-spokespersons of the experiment, Guido Drexlin from KIT and Christian Weinheimer from Münster University, comment on this very first result with great joy: "The fact that it took KATRIN only a few weeks to provide a world-leading sensitivity and to improve on the multi-year campaigns of the predecessor experiments by a factor of 2 demonstrates the extraordinary high potential of our project". The KIT Vice-President for Research, Oliver Kraft, congratulates the collaboration "on this fantastic achievement which builds on the many technological breakthroughs reached over the past years. These world-leading benchmarks would not have been possible without the close cooperation of all partners bundling their unique expertise."

Kathrin Valerius, leader of a Helmholtz Young Investigators Group, is coordinating KATRIN analysis activities at KIT. During the commissioning phase, her team worked in particular on precision modeling of the tritium source as well as on dedicated calibration and test measurements leading up to neutrino mass data taking: "We are delighted that the intense preparations are now bearing fruit, and proud to be able to analyze the first neutrino mass data with this highly motivated team."

The analyses, which were presented at a recent scientific symposium in Toyama, Japan, and simultaneously have been submitted to a renowned science journal for publication, make use of a fundamental principle known for a long time in direct kinematic studies of neutrino mass: in the beta decay process of tritium, the electron and its neutral, undetected partner, the (electron) neutrino, statistically share the available decay energy of 18.6 keV. In extremely rare cases, the electron effectively obtains the entire decay energy, while the neutrino is left with almost no energy, the minimum amount being - following Einstein - its rest mass E = mc². It is this tiny spectral distortion due to the non-zero neutrino mass that the KATRIN team was looking for in an ensemble of more than 2 million electrons collected over a few tens of eV narrow energy interval close to the kinematic endpoint (see Fig. 3).

This is only a tiny fraction of the total number of 25 billion electrons generated per second in the gaseous molecular tritium source of KATRIN. To maintain this huge number of decays, a closed tritium cycle at high throughput is mandatory. Operation of this unprecedented high-luminosity source requires the entire infrastructure of the Karlsruhe Tritium Laboratory, where the source cryostats are located. The adjacent huge electrostatic main spectrometer of 24 m length and 10 m diameter then acts as precision filter to transmit only the extremely tiny fraction of highest-energy electrons carrying information about the neutrino mass. Variation of the ultra-precise (on the ppm scale) retarding potential over tens of volts then gives unprecedented precision in the spectroscopy of electrons from tritium decay.

With the now established world-leading upper limit of the neutrino mass, KATRIN has taken its first successful step in elucidating unknown properties of neutrinos, many more steps will follow in the coming years. The two co-spokespersons look forward to further significant improvements of the neutrino mass sensitivity and in the search for novel effects beyond the Standard Model of Particle Physics. In the name of the entire collaboration, they would also like to thank the awarding authorities for their long-term support in the realization and operation of the experiment: "KATRIN is not only a shining beacon of fundamental research and an outstandingly reliable high-tech instrument, but also a motor of international cooperation which provides first-class training of young researchers."

KIT-specific parts of the text are colored, insert or exchange text by your own institution here.

New results for the mass of neutrinos 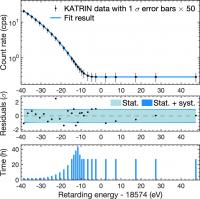 Electron Energy Spectrum of Tritium Scanning Together with Fitted Model