Place a single sheet of carbon atop another at a slight angle and remarkable properties emerge, including the highly prized resistance-free flow of current known as superconductivity.

Now a team of researchers at Princeton has looked for the origins of this unusual behavior in a material known as magic-angle twisted bilayer graphene, and detected signatures of a cascade of energy transitions that could help explain how superconductivity arises in this material. The paper was published online on June 11 in the journal Nature.

"This study shows that the electrons in magic-angle graphene are in a highly correlated state even before the material becomes superconducting, "said Ali Yazdani, Class of 1909 Professor of Physics, the leader of the team that made the discovery. "The sudden shift of energies when we add or remove an electron in this experiment provides a direct measurement of the strength of the interaction between the electrons."

This is significant because these energy jumps provide a window into the collective behaviors of electrons, such as superconductivity, that emerge in magic-angle twisted bilayer graphene, a material composed of two layers of graphene in which the top sheet is rotated by a slight angle relative to the other.

In everyday metals, electrons can move freely through the material, but collisions among electrons and from the vibration of atoms give rise to resistance and the loss of some electrical energy as heat - which is why electronic devices get warm during use.

In superconducting materials, electrons cooperate. "The electrons are kind of dancing with each other," said Biao Lian, a postdoctoral research associate in the Princeton Center for Theoretical Science who will become an assistant professor of physics this fall, and one of the co-first authors of the study. "They have to collaborate to go into such a remarkable state."

By some measures, magic-angle graphene, discovered two years ago by Pablo Jarillo-Herrero and his team at the Massachusetts Institute of Technology (MIT), is one of the strongest superconductors ever discovered. Superconductivity is relatively robust in this system even though it occurs when there are very few freely moving electrons.

The researchers set out to explore how the unique crystal structure of magic-angle graphene enables collective behaviors. Electrons not only have a negative charge, but also two other characteristics: angular momentum or "spin," and possible movements in the crystal structure known as "valley" states. Combinations of spin and valley make up the various "flavors" of electrons.

The team particularly wanted to know how these flavors affect collective behaviors, so they conducted their experiments at temperatures just slightly above the point at which the electrons become strongly interacting, which the researchers likened to the parent phase of the behaviors.

"We measured the force between the electrons in the material at higher temperatures in the hopes that understanding this force will help us understand the superconductor that it becomes at lower temperatures," said Dillon Wong, a postdoctoral research fellow in the Princeton Center for Complex Materials and a co-first author.

They used a tool called a scanning tunneling microscope, in which a conductive metal tip can add or remove an electron from magic-angle graphene and detect the resulting energy state of that electron.

Because strongly interacting electrons resist the addition of a new electron, it costs some energy to add the additional electron. The researchers can measure this energy and from it determine the strength of the interaction force.

"I'm literally putting an electron in and seeing how much energy it costs to shove this electron into the cooperative bath," said Kevin Nuckolls, a graduate student in the Department of Physics, also a co-first author.

The team found that the addition of each electron caused a jump in the amount of energy needed to add another one - which would not have been the case if the electrons were able to go into the crystal and then move freely among the atoms. The resulting cascade of energy transitions resulted from an energy jump for each of the electrons' flavors - since electrons need to assume the lowest energy state possible while also not being of the same energy and same flavor as other electrons at the same location in the crystal.

The quantitative measurements of the sudden shifts detected by the researchers confirms the picture that magic-angle graphene belongs to the class of superconductors with strong interaction among the electrons.

Graphene is a single-atom-thin layer of carbon atoms, which, due to the chemical properties of carbon, arrange themselves in a flat honeycomb lattice. The researchers obtain graphene by taking a thin block of graphite - the same pure carbon used in pencils - and removing the top layer using sticky tape.

They then stack two atom-thin layers and rotate the top layer by exactly 1.1 degrees - the magic angle. Doing this causes the material to become superconducting, or attain unusual insulating or magnetic properties.

This misalignment creates an arrangement known as a moiré pattern for its resemblance to a French fabric.

To conduct the experiments, the researchers built a scanning tunneling microscope in the basement of Princeton's physics building, Jadwin Hall. So tall that it occupies two floors, the microscope sits atop a granite slab, which floats on air springs. "We need to isolate the equipment very precisely because it is extremely sensitive to vibrations," said Myungchul Oh, a postdoctoral research associate and co-first author.

Additional contributions were made by Yonglong Xie, who earned his Ph.D. in 2019 and is now a postdoctoral researcher at Harvard University; Sangjun Jeon, who is now an assistant professor at Chung-Ang University in Seoul; Kenji Watanabe and Takashi Taniguchi of the National Institute for Material Science (NIMS) in Japan; and Princeton Professor of Physics B. Andrei Bernevig.

A similar cascade of electronic phase transitions was noted in a paper published simultaneously in Nature on June 11 by a team led by Shahal Ilani at the Weizmann Institute of Science in Israel and featuring Jarillo-Herrero and colleagues at MIT, Takashi Taniguchi and Kenji Watanabe of NIMS Japan, and researchers at the Free University of Berlin.

"The Weizmann team observed the same transitions as we did with a completely different technique," Yazdani said. "It is nice to see that their data is compatible with both our measurements and our interpretation."

The study was supported primarily by the Gordon and Betty Moore Foundation's EPiQS initiative and the U.S. Department of Energy. Additional funding was provided by the National Science Foundation, including the MRSEC program through the Princeton Center for Complex Materials; ExxonMobil through the Andlinger Center for Energy and the Environment at Princeton; and the Princeton Catalysis Initiative. Support was also provided by the Ministry of Education, Culture, Sports, Science and Technology of Japan; A3 Foresight; the Japan Science and Technology Agency; the Simons Foundation; the David and Lucile Packard Foundation; and the Eric and Wendy Schmidt Fund for Transformative Technology at Princeton. 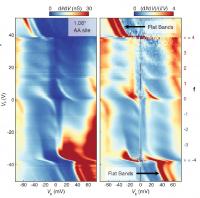