EAST LANSING, Mich. -- For most animals, scent is the instant messenger of choice for quickly exchanging personal profiles. Scientists, however, have long dismissed birds as odor-eschewing luddites that don't take advantage of scent-based communications.

In a first-of-its-kind study, however, a Michigan State University researcher has demonstrated that birds do indeed communicate via scents, and that odor reliably predicts their reproductive success. The study appears in the current issue of Animal Behaviour and focuses on volatile compounds in avian preen secretions.

Birds' preen glands are located near their tails. Using their beaks, birds extract oil from the glands and rub it on their feathers and legs. Historically, this activity was thought to simply bolster the strength of feathers. Danielle Whittaker, managing director of MSU's BEACON Center for the Study of Evolution in Action, and her research team, however, have shown that it plays a key role in signaling reproductive health.

The long-held assumption was that birds' preferred methods of communication and mate selection were visual and acoustic cues. Studying dark-eyed juncos, Whittaker's team compared which were more effective – chemical signals or size and attractive plumage.

The results showed that individual bird odor correlated with reproduction success while size and plumage were less reliable. The study also revealed that females were making multiple decisions based on how their potential mates smelled.

"Based on odor, females seemed to be not only choosing with which males to mate, but many times they also were selecting different males to raise their nestlings," Whittaker said. "Interestingly enough, the cuckolding males had higher levels of a 'female-like' odor."

In addition, the researchers believe odors serve as beacons for hormone levels, current condition and overall health, and genetic background.

Researchers from Indiana University also contributed to the study. The research was funded in part by the National Science Foundation. 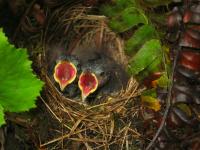