A team of Spanish researchers has made a high-speed recording of elves and sprites in storms, fleeting and luminous electric phenomena produced in the upper layers of the atmosphere. Their analysis of these observations has been published in the Journal of Geophysical Research.

"This is the first time in Europe that we have been able to use high-speed video to detect transitory luminous phenomena taking place in the upper atmosphere – so-called sprites (in the form of a carrot or column) and elves (which are ring shaped)", Joan Montanyà, co-author of the study and a researcher at the Department of Electric Energy at the Polytechnic University of Catalonia (UPC), tells SINC.

The results have been published in the Journal of Geophysical Research and show there are many fewer elves in storms that form over land than those at sea, where electric currents apparently have greater energy, especially in winter. Some of the recordings show elves and sprites at the same time, evidence of the strength of lightning over the sea during winter storms.

The scientists also observed the interaction between two sprites. A branch of one of them hit and bounced off the second, giving clues about their dynamics and electric structure. Sprites normally appear for around 40 milliseconds and 20 or 30 kilometres away from the site of the lightning.

"All these phenomena are related with storms, particularly winter storms, but they only appear in mesoscale convective systems (usually in large fronts), which produce lightning with high levels of energy or extreme electric currents", explains Montanyà.

As it is difficult to record these phenomena in situ during storms, the researchers placed a high-speed video camera on land with an image intensifier. This was used to remotely record a winter storm in the Western Mediterranean (at a distance of between 400 and 1,000 kilometres) between the coasts of Italy and Spain.

The physics of electric discharges

"The observations made it possible not only to capture images of these short duration events, but also mean we can study the structure and dynamics of these highly unique electric discharges", explains Montanyà.

"Understanding the physics behind lightning and events associated with it will help us to protect ourselves better", the scientist points out, stressing the importance of research into sprites and elves to better understand other phenomena, such as gamma rays from terrestrial sources (TGF, Terrestrial Gamma-ray Flash), which also develop above electric storms.

In fact, the European Space Agency (ESA)'s future Atmosphere-Space Interactions Monitor mission (ASIM) aims to monitor these phenomena by placing an instrument on the outside of the International Space Station, due to be launched in 2013.

Sprites are electric discharges shaped in the form of a carrot or vertical column that form in the mesosphere (at a height of between 50 and 85 km). They often appear with a luminous "halo". 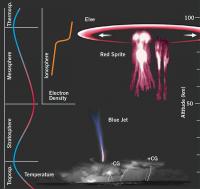