Most reptiles move slower when temperatures drop, but venomous rattlesnakes appear to be an exception. The cold affects them, but not as much as scientists expected.

"Many reptiles and other animals that rely on external sources of heat have muscles that don't contract as well when temperature drops. We wanted to know if that was the case with rattlesnakes," explained UC Riverside biologist Tim Higham.

To answer their question, Higham and a team from San Diego State University examined the speed at which rattlers struck out at perceived threats in temperature-controlled containers. The team's work is detailed in a new paper published this week in the Journal of Experimental Biology.

The team investigated how quickly the snakes struck out to defend themselves when faced with predators, as this speed can make the difference between life and death in nature.

"Although humans often fear snakes, it is important to realize that snakes are vulnerable to predation by animals such as birds, mammals, and other snakes," Higham said. "Defensive strikes are important for protecting them against predation."

When placed in the experimental containers, the research team found that rattlers continued to strike quickly at a balloon filled with warm water that played the role of an intruder.

"By far, the hardest part of the study was working with snakes in the 35 C treatment," said San Diego State University doctoral student Malachi Whitford, first author of the new study. "The snakes were extremely fast, making them very difficult to corral."

The strike speed was affected when the temperature dropped, but not as much as the team thought it would be.

"We expected their strike to be about half as fast for every 10-degree drop in temperature, but they're still able to uncoil and strike fairly rapidly, even at our lowest test temperatures," said SDSU ecologist and research team member Rulon Clark.

At most, the snakes were about 25 percent slower at the lowest temperature. The finding means that pit vipers, the type of rattlesnake studied, are slightly more vulnerable to real or perceived threats in colder temperatures but not by a lot.

This might help explain how rattlesnakes can thrive even in cooler climates like southern Canada. It also suggests that the snakes are using a mechanism other than just muscles in order to strike, as muscle movement becomes more difficult in the cold.

Kangaroos use tendons like elastic bands to bounce and hop without using much energy, the way that humans use a bow and arrow. The findings suggest that snakes may also be storing elastic energy somehow.

"Striking in any way is important to do quickly," Higham said. "As global temperatures increase, it's possible that snakes will become even more effective predators." 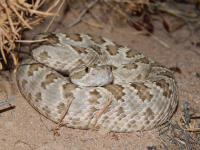