City streets can be mean, but somewhere near Brooklyn, a tree grows far better than its country cousins, due to chronically elevated city heat levels, says a new study. The study, just published in the journal Tree Physiology, shows that common native red oak seedlings grow as much as eight times faster in New York's Central Park than in more rural, cooler settings in the Hudson Valley and Catskill Mountains. Red oaks and their close relatives dominate areas ranging from northern Virginia to southern New England, so the study may have implications for changing climate and forest composition over a wide region.

The "urban heat island" is a well-known phenomenon that makes large cities hotter than surrounding countryside; it is the result of solar energy being absorbed by pavement, buildings and other infrastructure, then radiated back into the air. With a warming climate, it is generally viewed as a threat to public health that needs mitigating. On the flip side, "Some organisms may thrive on urban conditions," said tree physiologist Kevin Griffin of Columbia University's Lamont-Doherty Earth Observatory, who oversaw the study. Griffin said that the city's hot summer nights, while a misery for humans, are a boon to trees, allowing them to perform more of the chemical reactions needed for photosynthesis when the sun comes back up.

With half the human population now living in cities, understanding how nature will interact with urban trees is important, the authors say. "Some things about the city are bad for trees. This shows there are at least certain attributes that are beneficial," said lead author Stephanie Y. Searle, a Washington, D.C., environmental researcher who was a Columbia undergraduate when she started the research.

In spring 2007 and 2008, Searle and colleagues planted seedlings in northeastern Central Park, near 105th Street; in two forest plots in the suburban Hudson Valley; and near the city's Ashokan Reservoir, in the Catskill foothills some 100 miles north of Manhattan. They cared for all the trees with fertilizer and weekly watering. Maximum daily temperatures around the city seedlings averaged more than 4 degrees F higher; minimum averages were more than 8 degrees higher. By August, the city seedlings had developed eight times more biomass than the country ones, mainly by putting out more leaves. The researchers largely ruled out other factors that might drive tree growth, in part by growing similar seedlings in the lab under identically varying temperatures, and showing much the same result. Due to air pollution, the city also has higher fallout of airborne nitrogen—a fertilizer—which could have helped the trees as well, said Searle, but temperature seemed to be the main factor.

Other experiments done in Japan and Arizona have shown that higher temperatures, especially at night, may promote growth of rice plants and hybrid poplar trees. A 2011 study by a Lamont-based group showed that conifers in far northern Alaska have grown faster in recent years in step with rising temperatures. Some Eastern Seaboard trees also seem to be seeing growth spurts in response to higher carbon-dioxide levels alone, according to a 2010 study by scientists at the Smithsonian Institution. However, heat can cut both ways; in lower latitudes, rising temperatures and shifting weather patterns appear to be pushing some species over the edge by causing ecological changes that stress them; massive die-offs are underway in the U.S. West and interior Alaska. There is already some evidence that with warming climate, New York area forest compositions are already changing, with northerly species dwindling and southerly ones that tolerate more heat coming in, said Griffin. Red oaks are probably not immune to increasing heat, so there is no guarantee that they would do well in the New York City of the future.

New York City has some 5.2 million trees and is in the midst of a campaign to plant more. "Cities are special places—they might be laboratories for what the world will look like in coming years," said Gary Lovett, a forest ecologist at the Cary Institute of Ecosystem Studies in Millbrook, N.Y., some 90 miles north of Manhattan. With temperatures projected to rise, he said, "what kinds of trees are doing well there now might be related to what kinds might do well up here in a number of years."

The study's other authors are affiliated with the University of Canterbury in Christchurch, New Zealand; Black Rock Forest Consortium in Cornwall, N.Y.; and Weizmann Institute of Science in Rehovoth, Israel.

The paper, "Urban environment of New York City promotes growth in northern red oak seedlings," is at: http://treephys.oxfordjournals.org/content/early/2012/04/05/treephys.tps027.full?sid=ca754aba-06b3-4ae7-bc0e-f3d2e2847b60, or available from the authors.

Lamont-Doherty Earth Observatory seeks fundamental knowledge about the origin, evolution and future of the natural world. Its scientists study the planet from its deepest interior to the outer reaches of its atmosphere, on every continent and in every ocean, providing a rational basis for the difficult choices facing humanity. www.ldeo.columbia.edu

Do urban 'heat islands' hint at trees of future? 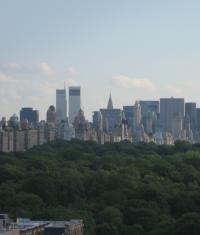 Cozier than the Catskills