CHAMPAIGN, Ill. — Researchers have identified a new target for the treatment of lymphoma and are testing a potential new drug in pet dogs afflicted with the disease. At low doses, the compound, called S-PAC-1, arrested the growth of tumors in three of six dogs tested and induced partial remission in a fourth.

The results of the study, conducted by researchers at the University of Illinois, appear this month in the journal Cancer Research.

The new compound targets a cellular enzyme, procaspase-3, that when activated spurs a cascade of reactions that kill the cell, said chemistry professor Paul Hergenrother, who co-led the study with Tim Fan, a professor of veterinary clinical medicine.

Procaspase-3 offers an attractive target for cancer therapy, in part because cancers often interfere with normal cell death, and in part because many tumors – including those found in breast cancer, colon cancer, lung cancer, lymphoma, melanoma and liver cancer – contain high levels of procaspase-3.

"In my lab, we try to think of novel targets and novel approaches to cancer and other diseases," Hergenrother said. "We think about the pathways that lead to those diseases, and we try to intervene at spots where others have not."

The new compound is a modified version of a drug the researchers previously tested in mice and one dog.

The original compound, called PAC-1, was found to cause neurological excitation (neurotoxicity) even at low doses, the researchers said. Fan and his colleagues hypothesized that PAC-1, which works in part by grabbing zinc away from other molecules, was crossing the blood/brain barrier and latching onto zinc in the brain.

To prevent the compound from passing into the brain, Hergenrother's laboratory made a derivative of PAC-1 with an added chemical group, called a sulfonamide. Tests in pet dogs with spontaneously occurring lymphoma showed that the new compound, S-PAC-1, stabilized or reduced the size of tumors in a majority of the animals, without neurotoxicity. Other side effects were mild, and recent adjustments to the treatment protocol have minimized or eliminated them, the researchers report.

If S-PAC-1 proves to be effective and safe as a lymphoma treatment and is approved by the FDA for use in dogs and/or humans (a process that could take years, the researchers emphasized), it will likely be added to the arsenal of drugs already used to combat lymphoma in both dogs and humans. It could be used in combination with other drugs as a first treatment option or serve as a second line of defense if the cancer returns.

Cancer drug combinations must be carefully tailored to avoid "overlapping toxicities," Fan said, so a drug that effectively treats lymphoma with minimal side effects is very desirable.

The study in pet dogs is also unusual, Fan said, as most studies look at effects in mice and then, if a compound is promising and appears safe, it is tested in clinical trials in humans. The six dogs used in this study were veterinary patients that had spontaneously developed lymphoma, he said.

The similarities between human and canine lymphoma also add to the desirability of this approach, Hergenrother said.

"If you look at the genetic signatures of canine lymphoma and human lymphoma, they're very, very similar and their response to therapy is very, very similar," he said. "So there's lots of reasons to be optimistic about a compound that has some effect in the canines, that it could have a similar effect in humans."

This study was supported by funding from the National Cancer Institute at the National Institutes of Health. A new $525,000 grant from the NCI will support a clinical trial of S-PAC-1 in companion animal dogs.

The paper, "Discovery and Canine Preclinical Assessment of a Nontoxic Procaspase-3-Activating Compound," is available from the U. of I. News Bureau. 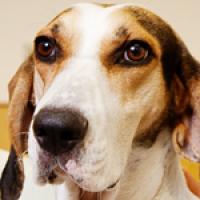