A special type of synthetic sugar could be the latest weapon in the fight against superbugs.

A team of scientists from The University of Queensland and Queensland biotechnology company Alchemia have discovered a potential new class of antibiotics inspired by sugar molecules produced by bacteria.

New antibiotics to which bacteria are unlikely to develop resistance are urgently needed to combat the rise of superbugs - drug resistant bacteria.

The research, led by Professor Matt Cooper and Dr Johannes Zuegg from UQ's Institute for Molecular Bioscience (IMB) in partnership with Alchemia, was published in scientific journal Nature Communications.

Professor Cooper, Director of the IMB Centre for Superbug Solutions, said bacteria are less likely to become resistant to an antibiotic based on a modified version of their own sugar.

"Bacteria have cell walls similar to the walls of a brick house, except instead of mortar the walls are held together by sugar polymers," Professor Cooper said.

"But if you add one of our modified sugar molecules, they stop the linking process, destroying the cell wall and killing the bacteria."

"The cell wall has been a target for antibiotics such as penicillin and vancomycin before, but the difference here is that we are stopping a centrally important part of the cell wall linking process."

Dr Zuegg said the team examined hundreds of versions of Alchemia's modified sugar molecules to find those that will kill bacteria and are non-toxic to human cells.

"Most molecules screened to become drugs have a flat, planar shape, whereas these molecules are three dimensional," Dr Zuegg said.

"This means we can build on the sugar core in a variety of ways to make thousands of different combinations in three dimensional space.

The team included researchers from University of Warwick in the UK, Academia Sinica in Taiwan and Ghent University in Belgium.

The work was supported by Australian and overseas organisations including Alchemia, the National Health and Medical Research Council, Bayer Animal Health and the Wellcome Trust. 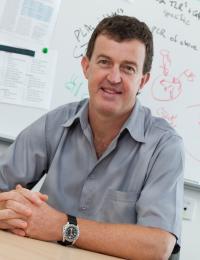 Matt Cooper, The University of Queensland