BETHESDA, MD. – Sildenafil (Viagra) significantly improved the cardiovascular and exercise performance measures of trained cyclists at high altitude, mostly because the drug helped some participants improve a lot -- up to 45% -- while others showed little change. Sildenafil provided no benefit at sea level.

Ten cyclists who took sildenafil at altitude collectively lowered the time it took to cover six kilometers by 15% compared to placebo trials at altitude. The cyclists also significantly improved stroke volume (the volume of blood moved out of one ventricle of the heart per beat) and cardiac output (stroke volume times heart rate) compared to the placebo trial. Sildenafil also minimized the decline of arterial oxygen saturation of the arteries when the cyclists were at simulated altitude of 12,700 feet.

But the researchers discovered that these improvements occurred largely because some people achieve major gains with sildenafil at altitude while others improve much less or not at all. The responders improved 39% in the time trial performance at altitude compared to their performance at altitude with a placebo. Some in the responder group improved as much as 45%, according to a study in the Journal of Applied Physiology published by The American Physiological Society. Non-responders improved an insignificant 1%.

Drug expands the blood vessels
Sildenafil citrate is best known as Viagra, a drug used to treat erectile dysfunction. The drug was originally developed to relieve high blood pressure. It causes blood vessels in certain tissues, such as the lungs, to relax. This improves blood flow from the heart and increases oxygen transport to working muscles. Because the high altitude atmosphere contains less oxygen, it is more difficult to get enough oxygen to support strenuous physical activity than it is at sea level.

Sildenafil works by inhibiting phosphodiestrase-5, an enzyme which degrades cyclic guanosine monophosphate (cGMP) a cell messenger that causes the blood vessels to relax, Friedlander explained. By inhibiting the enzyme, the drug allows greater vasodilation and greater blood flow. Although the drug works in different target sites, this study focused on the lungs.

The researchers hypothesized that the drug would allow the study's participants to improve their performance at altitude because it would reduce the constriction of vessels in the lungs that sometimes occurs at altitude. In turn, that would allow greater blood flow through the heart, better transfer of oxygen from the lungs to the blood and improved oxygen delivery to working muscles.

The participants, all trained cyclists, performed a total of 10 cycling trials, with and without sildenafil at sea level and at simulated altitude of 3,874 meters. Neither the participants nor the researchers knew whether the trial included a placebo or one of the two sildenafil doses, 50 mg or 100 mg.

The high altitude simulation was achieved by changing the mix of air. The cyclists began breathing the high altitude mix starting one hour before the exercise session and continuing through the session. The simulation did not include the lower air pressure that would occur at altitude, Friedlander said.

Responders versus non-responders
Four of the 10 participants responded to sildenafil while the remaining six did not, Friedlander said. The responders showed the greatest drops in stroke volume, cardiac output, and cycling performance between the sea level and high altitude trials without the drug.

"Without sildenafil, their performance went down more than others," Friedlander said. "With it, it brought them back up to the levels of the non-responders." The results suggest that the responders experienced a greater degree of constriction of the vessels in the lungs at altitude and therefore benefited more from the vessel relaxation effects of sildenafil.

"One of the messages of the paper is that not everybody benefits," Friedlander said. Sildenafil could be considered as a treatment for those who suffer most at altitude but, because of side effects that can include severe headaches and the apparent inability to help some people, it should not be taken as an exercise aid by everyone, she said.

This study adds to the scientific knowledge of what physiological factors limit performance at altitude, including the role that cardiac output plays, Friedlander said. For instance, physiologists don't know why some people have trouble at altitude and may develop illnesses such as acute mountain sickness or high altitude pulmonary edema while others adapt quickly. Studies like this may help identify some of the underlying differences between people and lead to better treatments.

Friedlander and her team are working on issues that could apply to those who have to rapidly acclimatize to high altitude. For instance, when soldiers deploy to Afghanistan, they must quickly undertake physically taxing work at 12,000-14,000 feet, conditions that can severely affect performance under potentially life-threatening conditions.

In a study Friedlander and colleagues conducted at 14,000 feet on Pike's Peak, Colorado, participants showed marked hormonal changes at altitude. These changes facilitate oxygen delivery. However, this benefit is suppressed when individuals don't eat enough and the body shifts focus to store more energy, Friedlander explained. That study appears in the June issue of the American Journal of Physiology-Endocrinology and Metabolism, also published by APS.

APS provides a wide range of research, educational and career support and programming to further the contributions of physiology to understanding the mechanisms of diseased and healthy states. In 2004, APS received the Presidential Award for Excellence in Science, Mathematics and Engineering Mentoring (PAESMEM).

Viagra improves high altitude exercise performance up to 45% for some 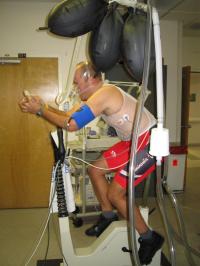 Viagra improves high altitude exercise performance up to 45% for some