A primitive galaxy that could provide clues about the early Universe has been spotted by astronomers as it begins to be consumed by a gigantic neighbouring galaxy.

The Little Cub galaxy - so called because it sits in the Ursa Major or Great Bear constellation - is being stripped of the gas needed to continue forming stars by its larger companion.

The find means scientists now have a rare opportunity to observe a dwarf galaxy as its gas is removed by the effects of a nearby giant galaxy to learn more about how this process happens.

As the Little Cub has remained almost pristine since its formation, scientists also hope its elements will reveal more about the chemical signature of the Universe just minutes after the Big Bang.

The research, carried out by the University of California Santa Cruz, USA, and Durham University, UK, is being presented today (Tuesday, 4 July) at the Royal Astronomical Society's National Astronomy Meeting.

The Little Cub and its larger neighbour, a grand design spiral galaxy called NGC 3359, are about 200 to 300 thousand light years apart, and approximately 50 million light years from Earth.

Gas from the Little Cub is being stripped away by its interaction with NGC 3359, which has up to 10,000 times as many stars as the Little Cub and is similar to our Milky Way.

By observing this cosmic feast, scientists hope to understand more about how and when gas is lost from smaller galaxies.

"We may be witnessing the quenching of a near-pristine galaxy as it makes its first passage about a Milky Way-like galaxy," said lead author Tiffany Hsyu, a graduate student in the Department of Astronomy & Astrophysics at UC Santa Cruz.

"It is rare for such a tiny galaxy to still contain gas and be forming stars when it is in close proximity to a much larger galaxy so this is a great opportunity to see just how this process works.

"Essentially the larger galaxy is removing the fuel that the Little Cub needs to form stars, which will eventually shut down star formation and lead to the smaller galaxy's demise."

The researchers also hope to gain an insight into the make-up of the very early Universe, by studying the hydrogen and helium atoms that are being illuminated by the small number of very bright stars within the Little Cub - which also has the less romantic name SDSS J1044+6306.

Since this galaxy is so primitive, it may still preserve the hydrogen and helium atoms that were created minutes after the Big Bang.

Research co-author Dr Ryan Cooke, Royal Society University Research Fellow, in Durham University's Centre for Extragalactic Astronomy, said: "We know by studying the chemistry of the Little Cub that it is one of the most primitive objects currently known in our cosmic neighbourhood.

"Such galaxies, which have remained dormant for most of their lives, are believed to contain the chemical elements forged a few minutes after the Big Bang.

"By measuring the relative number of hydrogen and helium atoms in the Little Cub we might be able to learn more about what made up the Universe in the moments after it began 13.7 billion years ago."

The researchers hope further observations will find more pristine galaxies where the chemical signature of the early Universe might be found.

The Little Cub was initially identified as a potentially pristine dwarf galaxy in data from the Sloan Digital Sky Survey (SDSS). Follow-up observations were conducted using the 3-metre Shane Telescope at Lick Observatory and the 10-metre telescope at the WM Keck Observatory.

"The Little Cub's discovery is a terrific example of using the smaller 3-metre-class Lick Observatory to scan through hundreds of candidates before focussing on the best sources with UC's 10-metre Keck telescope," said co-author J. Xavier Prochaska, Professor of Astronomy and Astrophysics at UC Santa Cruz.

A paper describing the discovery of Little Cub has been submitted for publication in the Astrophysical Journal Letters.

The research was funded by the WM Keck Foundation, Google, The Royal Society, NASA, the Science and Technology Facilities Council and the National Science Foundation (USA).

The Royal Astronomical Society's National Astronomy Meeting is taking place at the University of Hull, UK, until Thursday, 6 July, 2017. 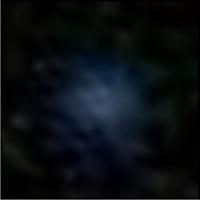