Water frogs could become regionally extinct in part of their native Turkey in a little over a decade because too many are being taken for food.

A new study, carried out in partnership with Ege University, Middle East Technical University, Stony Brook University and the Turkish government, showed the population of Anatolian water frogs had fallen by around 20 per cent each year between 2013 and 2015 in the country's Ceyhan and Seyhan deltas.

Anatolian water frogs (Pelophylax spp) form a species complex, made up of two, and possibly up to five, closely related species. The researchers predicted a 90 per cent chance they would be wiped out in the south-central Çukurova Region by 2050 - with a likely year of extinction in 2032 if harvesting trends continue.

Harvest of wild animal and plant populations globally for food, meat, medicines and pets threaten many species. Amphibians are among the most threatened animal groups, impacted by a variety of factors, including environmental contamination, habitat loss, global climate change, diseases, chemicals, invasive species and overharvesting.

Frog harvesting, an industry which has taken place in Turkey for 40 years, is worth nearly $4 million each year. The country exports more than 36 million frogs annually, with the main importers being countries in the EU and the USA. Frogs are rarely eaten domestically.

The new study has been published in Oryx -The International Journal of Conservation. Kerim Cicek, one of the authors of the paper, said: "Can you imagine a world without the chorus of frogs? Amphibians play an important role in nature both as predators and prey.

"Declining amphibian populations worldwide could have an irreversible and destructive impact on both natural ecosystems and human welfare. They are integral components of many ecosystems, often constituting the highest fraction of vertebrate biomass.

"Unfortunately, the literature on declining amphibian populations and its conservation has increased exponentially each year. We must stop the alarming decline of amphibians before it's too late."

Researchers highlighted Turkey's position in the 'extinction domino' line, pointing out that the harvest pressure could shift to, and endanger, other populations that are currently stable. When frog harvest was banned in France and Romania, they said, exports of wild frogs from India and Bangladesh increased, leading to population declines. When harvesting was subsequently banned in those countries, the pressure on frog populations was mirrored in Indonesia and China - now the largest exporters of frogs.

Mr Cicek added: "It is obvious that unsustainable harvest damages frog populations irrevocably in any part of the world. We can see this in Turkey, but it has also taken place in France, and it is now taking place in the USA, Indonesia, and so on. It is important to ban harvesting or to take other precautions."

Large-scale collections of frogs from the wild not only reduces population sizes, it also causes habitat disturbance, spreads diseases, and leads to the introduction of exotic pests and parasites. There is also a concern that frogs exported live may end up in pet shops, and in some cases become an invasive species.

To carry out their study, the researchers tagged 13,811 frogs sampled in 10 stations, including five ponds, three irrigation canals and two streams. They conducted sampling four times per season for the three-year-duration of the survey. In order to reach their conclusions, they captured and marked frogs with a visible implant, and then recorded re-captures in subsequent seasons to extrapolate population predictions.

Frog harvesting is the main livelihood for many local people in the Ceyhan and Seyhan deltas. Most harvesters have low income, no permanent job and no social benefits.

The authors of the study said that their source of income could disappear if frog populations continue to dwindle at the current rate.

Harvesters typically work at night in groups of three or four. The price-per-kilogram depends on demand, but usually varies between USD 0.60-2.60. In one night, a harvester typically captures 20-39 kg of frogs, but some manage to collect up to 60 kg. The average harvest from the Ceyhan-Seyhan region is about 327 tons each year - representing about 17 million frogs.

The authors of the study stated the population could survive if harvest rates decrease. To do this, they recommended that wild frog harvesting be banned in Turkey during the mating season, and that the hunting and export of frogs under 30 g should be totally eradicated.

In addition, they recommended obligatory training for harvesters and the introduction of quotas or the closure of harvest locations every other year to relieve the pressure on frog populations. They also suggested that the Turkish Government should encourage greater take up of frog farming to take pressure off wild populations.

Over-harvesting could wipe out water frogs in parts of Turkey 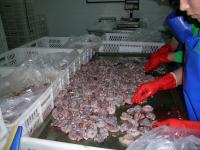 Frogs Being Processed for Market 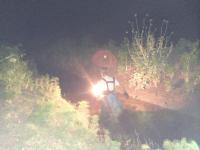