Violent, unprovoked outbursts in male mice have been linked to changes in a brain structure tied to the control of anxiety and fear, according to a report by researchers from NYU Langone Medical Center to be published in the journal Current Biology online Feb. 11, 2016.

Damage or lost function in the animals' midbrain wall structure -- the lateral septum -- was found to trigger a cascade of activity in other brain regions that produced "septal rage." These sudden, violent acts, mostly attacks on other mice, have long been seen in rodents with a damaged lateral septum, and in some birds, researchers say.

"Our latest findings show how the lateral septum in mice plays a gatekeeping role, simultaneously 'pushing down the brake' and 'lifting the foot off the accelerator' of violent behavior," says study senior investigator Dayu Lin, PhD, an assistant professor at NYU Langone's Druckenmiller Neuroscience Institute.

Lin emphasizes that septal rage is not known to occur in humans, but that studying male aggression in mice might help to map the circuitry involved in controlling other forms of aggression, including violent behavior in humans.

Among the study's key findings was that stimulating brain cells in the lateral septum controlled other brain cells, notably in a centrally located region of the hypothalamus, identified anatomically as the ventrolateral part of the ventromedial hypothalamus. Previous research by Lin had shown this brain region to be highly active during natural aggression but, until now, had not identified the other parts of the brain that interact with it in this context.

By "exciting" selected groups of brain cells with light from a surgically inserted probe, Lin and her colleagues changed the activity of cells in the lateral septum, and found that they could start, stop, and re-start aggressive outbursts in the study mice.

According to Lin, interrupting the connection between the lateral septum and ventromedial hypothalamus did not affect the mice's sexual behavior, and did not in other experiments stop male mice from attempting to have sex with female mice. This is important, Lin says, because it demonstrates that two innate behaviors, aggression and sexual behavior, can be adjusted separately.

The scientists also found that when excited, lateral septum cells increased activity in one set of brain cells in the ventrolateral part of the ventromedial hypothalamus, even as they decreased activity in another nerve cell set in the same region. Indeed, the cells most active during mice attacks were those suppressed to the greatest degree during septal stimulation, while the cells suppressed during aggression were most active when the lateral septum was stimulated. Lin says this finding suggests that the lateral septum is a "smart" gatekeeper of aggression, suppressing attack-excited cells while activating attack-inhibited cells.

"Our research provides what we believe is the first evidence that the lateral septum directly 'turns the volume up or down' in aggression in male mice, and it establishes the first ties between this region and the other key brain regions involved in violent behavior," says Lin.

The research team next plans to investigate which specific brain cells in the lateral septum control male aggression, and under what conditions they are activated to promote or halt the behavior. Lin says her long-term goal is to determine whether or not therapeutic means can be found to control aggression without compromising other social and cognitive functions.

Origins of 'rage' identified in brain in male animal model

Diagram of Male Mouse Brain During 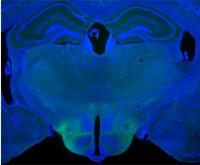