Kaleidocycles are found where science, math, and art meet. The objects resemble geometric sculptures that might be found in a modern art museum, but it is the motions they can undergo that really capture the imagination. The ring linkages, constructed from hinges and rigid geometric shapes, can be turned inside-out continuously, reminiscent of a flower bud blooming over and over again. The mesmerizing objects inspire wonder in all those who see them -- including curious engineers and mathematicians.

Researchers at the Okinawa Institute of Science and Technology Graduate University (OIST) have now unveiled a new class of kaleidocycles, one they predict could spur advances in fundamental research, synthetic chemistry, and even robotics. They published a paper describing the objects, called Möbius Kaleidocycles, on December 17, 2018, in the Proceedings of the National Academy of Sciences of the United States of America.

"A classical kaleidocycle made from six triangular pyramids can be moved in only one specific way, so we were interested in finding other ring linkages with that property -- we weren't sure if such objects could be constructed," said Dr. Johannes Schönke, first author of the study and a postdoctoral scholar in the OIST Mathematics, Mechanics, and Materials Unit. Based on this research, Schönke designed an interactive visualization tool to further explore the movements of Möbius Kaleidocycles. "The fact that your tablet can easily perform these calculations in real time shows that we were able to distill the problem into an easily computable system."

"This work falls under the area known as kinematics, or the geometry of motion," said Prof. Eliot Fried, senior author of the study and principal investigator of the research unit. "A kinematical result is far-reaching because it doesn't rely on particular material properties."

With a few precise folds and some glue, a flat sheet of paper can be transformed into a classical kaleidocycle. The realized object consists of six identical triangular pyramids joined together by hinges like those of a revolving door. When the two ends of this chain of pyramids are linked, the angle between neighboring hinges is exactly 90 degrees. This precise relationship makes it possible for classical kaleidocycles to turn inside-out with perfect threefold symmetry.

A similar kaleidocycle can be constructed from eight triangular pyramids, but there's a catch: rather than rotating in one distinct way, such an eightfold kaleidocycle can move in various ways. These additional "degrees of freedom" make the object move in a wobbly fashion, rendering it less useful in application. Schönke and Fried wondered if they could create a new kaleidocycle with seven, eight, nine or more elements that still retained the classic single degree of freedom.

"We quickly realized that we had to get away from the idea that neighboring hinges have to be at right angles," said Schönke.

With the help of mathematics, computer simulations, and both paper and 3D printed models, the researchers realized that a special "twist angle" exists for each kaleidocycle, depending on its total number of links. If the angle between hinges is too small, the ends of the chain cannot be brought together to form a closed ring. If the angle is too large, the resulting object will have additional degrees of freedom and move like a slithering snake.

Schönke and Fried named their creations "Möbius Kaleidocycles" in reference to a famous geometrical object known as a Möbius band. You can create your own Möbius band by taking a rectangular strip of paper, twisting one end 180 degrees, and connecting it to the remaining end.

Unlike a circular ring made from the same paper strip, which would have two distinct sides and edges, a Möbius band has only one side and one edge. If you trace a path along the midline of the band, you will return to the starting point but on the other side of the strip of paper, all without crossing the edge of the band. Möbius Kaleidocycles share this topology, and therefore have no "top" or "bottom." Möbius Kaleidocycles are like a Möbius band formed with a 540 degree twist, which also results in a one-sided, single-edged surface.

Due to their unique properties, Möbius Kaleidocycles could be used for a diverse range of applications. The researchers propose the objects might form the basis for designing new mixing machines, energy transmitting devices, or robotic arms. Individual Möbius Kaleidocycles could be designed to function as self-propelling submarines, capable of collecting water samples or monitoring marine life. The objects can also be joined together to create new deployable devices -- objects that function by changing shape, such as umbrellas or solar panels on spaceships.

"A chemist could potentially synthesize molecules based on Möbius Kaleidocycles," said Schönke. "Because friction is negligible on a molecular scale, those molecules could essentially rotate forever and would likely have an extremely high heat capacity."

"We hope other researchers will be inspired to address those questions," said Fried, who also remarked that "This work also allows us to enter a community at the interface of mathematics, art and architecture, which is exciting in its own right."

Journal
Proceedings of the National Academy of Sciences
Funder
Okinawa Institute of Science and Technology Graduate University with subsidy funding from the Cabinet Office, Government of Japan 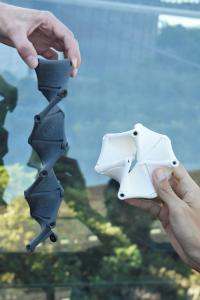