Hundreds of thousands of American youth are following marijuana-related Twitter accounts and getting pro-pot messages several times each day, researchers at Washington University School of Medicine in St. Louis have found.

The tweets are cause for concern, they said, because young people are thought to be especially responsive to social media influences. In addition, patterns of drug use tend to be established in a person's late teens and early 20s.

In a study published online June 27 in the Journal of Medical Internet Research, the Washington University team analyzed messages tweeted from May 1 through Dec. 31, 2013, by a Twitter account called Weed Tweets@stillblazintho. Among pro-marijuana accounts, this one was selected because it has the most Twitter followers — about 1 million. During the eight-month study period, the account posted an average of 11 tweets per day.

"As people are becoming more accepting of marijuana use and two states have legalized the drug for recreational use, it is important to remember that it remains a dangerous drug of abuse," said principal investigator Patricia A. Cavazos-Rehg, PhD. "I've been studying what is influencing attitudes to change dramatically and where people may be getting messages about marijuana that are leading them to believe the drug is not hazardous."

Although 19 states now allow marijuana use for medical purposes, much of the evidence for its effectiveness remains anecdotal. Even as Americans are relaxing their attitudes about marijuana, in 2011 marijuana contributed to more than 455,000 emergency room visits in the United States, federal research shows. Some 13 percent of those patients were ages 12 to 17.

A majority of Americans favor legalizing recreational use of the drug, and 60 percent of high school seniors report they don't believe regular marijuana use is harmful. A recent report from the U.N. Office on Drugs and Crime said that more Americans are using cannabis as their perception of the health risk declines. The report stated that for youth and young adults, "more permissive cannabis regulations correlate with decreases in the perceived risk of use."

Many of the tweets were meant to be humorous. Others implied that marijuana helps a person feel good or relax, and some mentioned different ways to get high.

With the help of a data analysis firm, the investigators found that of those receiving the tweets, 73 percent were under 19. Fifty-four percent were 17 to 19 years old, and almost 20 percent were 16 or younger. About 22 percent were 20 to 24 years of age. Only 5 percent of the followers were 25 or older.

"These are risky ages when young people often begin experimentation with drugs," explained Cavazos-Rehg, an assistant professor of psychiatry. "It's an age when people are impressionable and when substance-use behaviors can transition into addiction. In other words, it's a very risky time of life for people to be receiving messages like these."

Cavazos-Rehg said it isn't possible from this study to "connect the dots" between positive marijuana tweets and actual drug use, but she cites previous research linking substance use to messages from television and billboards. She suggested this also may apply to social media.

"It was surprising to see that members of these minority groups were so much more likely than Caucasians to be receiving these messages," Cavazos-Rehg said, adding that there is particular concern about African-Americans because their rates of marijuana abuse and dependence are about twice as high as the rate in Caucasians and Hispanics.

The findings point to the need for a discussion about the pro-drug messages young people receive, Cavazos-Rehg said.

"There are celebrities who tweet to hundreds of thousands of followers, and it turns out a Twitter handle that promotes substance use can be equally popular," she said. "Because there's not much regulation of social media platforms, that could lead to potentially harmful messages being distributed. Regulating this sort of thing is going to be challenging, but the more we can provide evidence that harmful messages are being received by vulnerable kids, the more likely it is we can have a discussion about the types of regulation that might be appropriate." 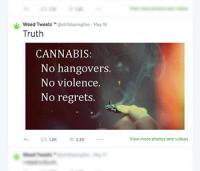 Hundreds of Thousands of Young People Getting Pro-marijuana Tweets