Selective fishing can disrupt the delicate balance maintained between corals and algae in embattled Caribbean coral reefs. Removing large parrotfish, which graze on algae like large land mammals graze on grasses, can allow the algae to overtake the corals, with potentially dire consequences for reef health. New experimental research suggests that maintaining a healthy size distribution of parrotfishes in a sea floor ecosystem through smart fishing practices could help maintain reefs that are already facing decline due to climate change.

A paper describing the research by scientists at Penn State and the University of California, Santa Barbara appears online in the journal Ecological Monographs.

"Coral reefs are incredibly beautiful and intrinsically valuable, but they also protect thousands of miles of coastline and provide habitat for astonishing biodiversity that is the major source of protein for nearly a billion people worldwide," said Andrew A. Shantz, Eberly Research Postdoctoral Fellow at Penn State and the first author of the paper. "Understanding how fishing impacts coral ecosystems will help us to protect this invaluable resource."

"Because biomass remained basically the same in regions where there is heavy fishing, we were interested to see if different sized fish played different ecological roles," said Shantz. "We set up an experiment where we could exclude larger fish from accessing an area to see how changes in the distribution of fish sizes impacted corals and their relationship with algae."

The experiment involved three different enclosures with different sized openings placed on the sea floor around corals in the protected Florida Keys. One enclosure allowed access to fish of any size, the second excluded only the largest parrotfish, and the third excluded large and medium sized parrotfish.

"We found that by excluding large parrotfish, the algae grew four times faster," said Shantz. "By excluding both large and medium parrotfish, the algae grew ten times faster. So even though fishing does not reduce the biomass of the fish, it's the larger fish that keep the algae at bay. Unless we can develop and implement fishing strategies that maintain a healthy distribution of fish sizes--for example, a slot based system with both minimum and maximum size restrictions--the corals in these regions are at risk."

In addition to Shantz, the research team includes Mark C. Ladd and Deron E. Burkepile from the University of California, Santa Barbara. The research was funded by the U.S. National Science Foundation and a Florida International University Dissertation Year Fellowship to Shantz. 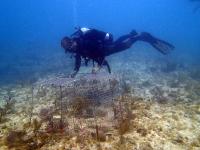 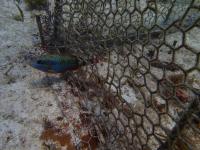