Smithsonian scientists and their collaborators have found new evidence that prehistoric Indigenous peoples did not significantly alter large swaths of forest ecosystems in the western Amazon, effectively preserving large areas of rainforests to be unmodified or used in sustainable ways that did not reshape their composition. The new findings are the latest in a long scientific debate about how people in the Amazon have historically shaped the rich biodiversity of the region and global climate systems, presenting new implications for how the Amazon's biodiversity and ecosystems can be best conserved and preserved today.

In recent years, scientists' understanding of the Amazon rainforest has been increasingly informed by a body of research that suggests the landscape was actively, intensively shaped by Indigenous peoples before the arrival of Europeans. Some studies ascribe the tree species that now dominate the forest to prehistoric human management and landscape engineering. Other work posits that when colonizers from Europe caused massive losses to Indigenous Amazonians with disease, slavery and warfare, the sudden interruption in landscape-scale manipulation resulted in so much forest regrowth that it caused a global drop in atmospheric carbon dioxide that brought about a climactic shift that is known as the "Little Ice Age."

Now a new study led by Smithsonian researchers, published June 7 in the journal Proceedings of the National Academy of Sciences, suggests that for at least the past 5,000 years, large areas of the rainforest in western Amazonia located away from the fertile soils near rivers were not periodically cleared with fire or subject to intensive land use by the Indigenous population before the arrival of Europeans.

The study, led by Smithsonian senior scientist emerita Dolores Piperno of the National Museum of Natural History and the Smithsonian Tropical Research Institute in Panama, is the latest entry in a nearly decade-long scientific debate over prehistoric human influence in the world's largest rainforest.

"Far from implying that complex, permanent human settlements in Amazonia had no influence over the landscape in some regions, our study adds substantially more evidence indicating the bulk of the Indigenous population's serious impact on the forested environment was concentrated in the nutrient-rich soils near rivers, and that their use of the surrounding rainforest was sustainable, causing no detectable species losses or disturbances, over millennia," Piperno said.

To explore the extent and scale of Indigenous modification of the Amazon, Piperno and her co-authors collected and analyzed a series of 10 roughly 3-foot-long soil cores from three sites in the remote northeastern corner of Peru.

The three sites were located at least a half-mile (about 1 kilometer) away from river courses and floodplains, known to researchers as interfluvial zones. Interfluvial forest comprises more than 90% of the Amazon's land area and is therefore crucial to determining the extent of Indigenous influence on the landscape, precisely because most major settlements identified by archaeologists thus far are near rivers.

Piperno and her co-authors used the soil cores to create timelines of plant life and fire history at each location going back some 5,000 years. To do this, the team extracted long-lasting microfossil particles of dead plants called phytoliths and looked for traces of fire such as charcoal or soot. Fire, in a landscape that receives nearly 10 feet of rain annually, is nearly always human in origin and would have been instrumental in clearing large areas of land for human uses, such as agriculture and settlement.

The team identified which plant type each phytolith belonged to by comparing them with a comparative reference library of modern plants and used radiocarbon dating to reveal how long ago the plants lived. The dating of both phytoliths and charcoal determined the age of the plant fossils and any remnants of fire found in a core.

Finally, the researchers also conducted surveys of the modern forests found around each core. These forest inventories evinced the dizzying diversity of the region, yielding 550 tree species and 1,300 other species of plants.

Piperno said all the analyses pointed in the same direction: "We found no evidence for crop plants or slash and burn agriculture; no evidence for forest clearing; no evidence for the establishment of forest gardens. These are very similar to results from other regions of Amazonia. We now have a substantial amount of evidence that extensive, wholesale alterations of forest across the interfluvial areas of Amazonia did not occur in prehistory."

Instead, the researchers saw a rainforest ecosystem that remained relatively stable for thousands of years and is much like the ones still standing in similarly undisturbed regions today.

"This means that ecologists, soil scientists and climatologists looking to understand this region's ecological dynamics and capacity for storing carbon can be confident that they're studying forests that haven't been heavily modified by people," Piperno said.

But she says it also means we "should not assume the forests were once resilient in the face of significant past disturbance," and added that this has important implications for "good sustainable land use and conservation policies" because such policies "require adequate knowledge of past anthropogenic and natural impacts on the Amazonian ecosystem together with its responses."

In light of these results, Piperno and the research team also find the idea that reforestation following the arrival of Europeans triggered the Little Ice Age implausible.

"Without significant forest clearing in these and other regions studied by our team and others it appears unlikely that there was sufficient forest regeneration to have affected global carbon dioxide after European contact," Piperno said.

As for why there does not appear to have been any large-scale modification of the interfluvial Amazon, the simplest explanation for the pattern may be in the soil, which has so few nutrients that it would not have been desirable for crops and other plant manipulations compared to areas on riverbanks and floodplains.

Piperno said that more work still needs to be done in other yet unstudied regions away from riverbanks and floodplains to obtain a wider view of the vast Amazon and that the team's results do not imply that no form of Indigenous forest management occurred in the region, just that it was not intensive enough to show up in the soil cores.

"To me, these findings don't say that the Indigenous population wasn't using the forest, just that they used it sustainably and didn't modify its species composition very much," Piperno said. "We saw no decreases in plant diversity over the time period we studied. This is a place where humans appear to have been a positive force on this landscape and its biodiversity over thousands of years."

Funding and support for this research were provided by the Smithsonian, the National Science Foundation, the Wenner-Gren Foundation for Anthropological Research, the European Research Council and the Gordon and Betty Moore Foundation.

Indigenous peoples were stewards of the Western Amazon 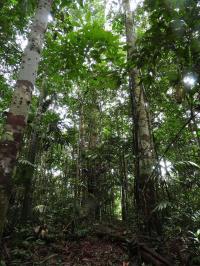 Palm and other arboreal phytoliths