Channel coding theory studies techniques for introducing redundancy into information, to protect it from errors that occur during transmission or storage. For example, human speech has some redundancy, so that not every combination of sounds or letters is a permissible word. This enables people to communicate even in a noisy environment. Storage and information transmission systems are integral parts of gadgets, smartphones and computers. Their developers must implement simple and reliable methods to protect data from corruption.

Currently, many universities in the world are working on improving polar codes. This is the method of noise-immune coding developed by Turkish scientist Erdal Arikan. Significant progress in this area was achieved by SPbPU.

"We were able to design codes, which surpass state-of-the-art competitors in performance and decoding simplicity," says Peter Trifonov, an associate professor of the Higher School of Software Engineering at SPbPU.

"We generalized the construction of polar codes proposed by Arikan and obtained polar subcodes. We excluded some codewords from Arikan's polar codes, which could be easily entangled by the receiver, and introduced additional restrictions on the symbols of their codewords in order to simplify the error correction task of the decoder, " added Trifonov.

In addition, the researchers of Polytechnic university proposed a computationally simple decoding algorithm for polar codes and subcodes. Decoding process can be interpreted as searching for the shortest path in a labyrinth. By predicting the average number of errors at different decoding phases (in the labyrinth corridors), it was possible to significantly reduce decoding complexity. As a result, scientists of SPbPU obtained both improved performance compared to widely used low-density parity check (LDPC) codesand decreased decoding complexity.

Improved code performance enables communication system to operate in more challenging environment. This results in improved coverage and enables the system to support a larger number of users. And due to reduced complexity of decoding algorithms, mobile terminals will become more energy efficient.

Polar codes have not yet found an application in real devices, but now various generalizations of polar codes are considered by the leading international standardization bodies to be included as a part of 5G wireless standard .

Currently, theoretical foundations, including the principle of polar subcodes construction and decoding algorithms, are developed. Now researchers are working on adapting them for standardization and then they are going to start designing specific devices. 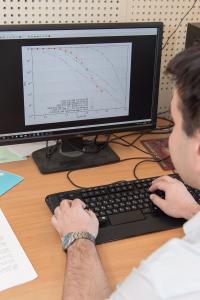