Providence, RI--- A collaboration between a mathematician and an artist-geometer has resulted in some of the most mathematically sophisticated and aesthetically gripping animations ever seen in the field. Their visualizations of cutting-edge research in dynamical systems theory not only provide a dramatic new way of visiting mathematical worlds once seen only in the mind's eye, but also point to a new era for the use of computer graphics in communicating and carrying out mathematical research.

The two collaborators are Etienne Ghys, a mathematician at the Ecole Normale Superieure in Lyon, France, and Jos Leys, a Belgian graphic artist and engineer with strong mathematical interests. They have written an online animated exposition of an important new theorem Ghys has proved in dynamical systems theory. The exposition will appear as the November 2006 installment of the Feature Column on the web site of the American Mathematical Society.

Ghys was preparing a lecture for the Bibliotheque National de France when he found some intriguing mathematical pictures on Leys's web site. Soon the two were discussing making illustrations of a theorem that Ghys had recently proved, which gives a deep connection between two seemingly unrelated phenomena in dynamical systems theory: Lorenz attractors and modular flows. A dynamical system is a system that evolves over time, like the weather or the stock market. Mathematicians study the differential equations that describe how dynamical systems change over time.

Lorenz attractors: The Lorenz attractor has become the paradigmatic image of chaos theory. In the 1960s the meteorologist Edward Lorenz stumbled on this "strange attractor" in his research examining a particular dynamical system that modeled weather patterns. As that system evolves, the points in it trace out trajectories that return back to their original locations, forming periodic orbits that accumulate around the attractor (hence the name). The orbits are knots: closed loops in 3-dimensional space. Out of the infinite universe of mathematical knots, only a small set of very special knots appear in the Lorenz attractor. The animations of Ghys and Leys display these special Lorenz knots and show how the knots determine the shape of the Lorenz attractor.

Modular flows: A lattice is a collection of evenly-spaced points in the plane, like the set of dots in the Dots and Boxes game. A dynamical system, or flow, on the lattice is a rule for making the lattice points move in a uniform way across the plane. This notion of "modular flow" has been an important tool in mathematics, in particular in number theory, where its roots go back to the great German mathematician Carl Friedrich Gauss (1777-1855). Ghys showed how each modular flow can be associated in a unique way with a knot---and he discovered that the set of knots associated with modular flows is exactly the set of Lorenz knots!

This extraordinary result, and the animations illustrating it, formed the centerpiece for a plenary lecture Ghys presented at the quadrennial International Congress of Mathematicians in Madrid, Spain, in August 2006. Being invited to present an ICM plenary lecture is a coveted honor in the mathematical world. Ghys's lecture was enthusiastically received and constituted a major highlight of the Congress, which was attended by 4000 mathematicians from all over the world.

Getting the Knots to Close

When Ghys and Leys first began working together, they intended to produce still images to illustrate Ghys's theorem. "Soon, we realized that animations are much more fun than still images," Ghys said. The two worked closely to develop numerical algorithms to carry out the animations. All of the work was done on their personal computers, and their interaction has been almost entirely through email. "It was an intense collaboration," said Leys. "We exchanged about 1,800 email messages in 4 months, a lot of them sent late at night when we were close to a breakthrough." While Leys wrote code in a program called UltraFractal that is good for pictures but not ideal for mathematics, Ghys would work in parallel using specialized mathematical software packages to provide hints about how the computations should be done.

The perfection with which the animations capture the mathematical world of dynamical systems and knots came as a result of hard work---and a great deal of back and forth between Ghys and Leys. "Almost never did our knots close!" Ghys recalled. "Most of the time, the knots came out in several pieces not connected together." The errors were caused sometimes by wrong formulae, and sometimes because of numerical artifacts arising from the computing scheme. As Ghys and Leys worked together to find the best way to represent the mathematics, each learned about the other's area of expertise.

Their animations offer a glimpse deep into the heart of a mathematical world that few have been able to see until now. By the time they had begun collaborating, Ghys already had a mathematical proof of his theorem. But the animations brought him to a new level of understanding. "When I saw the proof in action, I was 'more convinced' that it is true!"

Link to the Riemann Hypothesis

At the end of their Feature Column, Ghys and Leys present an animation of yet another kind of dynamical system called a horocycle flow. There is a link between this flow and a question known as the Riemann Hypothesis, which is a statement about the distribution of prime numbers and is perhaps the biggest open problem in mathematics today. If one could prove a certain fact about the horocycle flow, the Riemann Hypothesis would follow as a consequence.

The Feature Column by Ghys and Leys is available at http://www.ams.org/featurecolumn 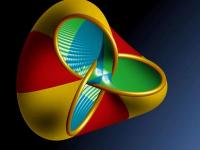