(Santa Barbara, Calif.) –– The female common market squid –– AKA Doryteuthis opalescens –– may not be so common after all. Researchers at UC Santa Barbara have discovered that this glamorous cephalopod possesses a pair of stripes that can sparkle with rainbow iridescence. These flank a single stripe, which can go from complete transparency to bright white.

This marks the first time that switchable white cells based on reflectins –– the proteins responsible for reflecting light as color –– have been observed. The findings are published in the Journal of Experimental Biology.

The current research builds on the scientists' previous work that revealed the mechanism responsible for the dramatic changes in color used by such creatures as squids and octopuses. "Whether colored or white, these cells become switchable when activated by the neurotransmitter acetylcholine," explained study co-author Daniel Morse, professor of molecular genetics and biochemistry in the Department of Molecular, Cellular, and Developmental Biology.

"The facts that the switchable white cells contain some of the same reflectins, that they're triggered by the same neurotransmitter, and that this drives a change in the membrane assemblies containing the reflectins all suggest that they operate by a molecular mechanism fundamentally related to that controlling the switchable color," he added.

The switchable color and white cells have two different systems for reflecting light, because when activated, the reflectins produce two distinct biological nanostructures. The internal arrangement of the reflectins in switchable color cells, called iridocytes, creates an accordion-like structure or, in scientific terms, alternating lamellae. Switchable white cells, called leucophores, also contain reflectins, but in a thousand or more small membrane-enclosed spherical vesicles of varying sizes and shapes. When the reflectins in both iridocytes and leucophores are induced to condense, the refractive index increases, causing light to be reflected in two distinct ways: Bragg reflection and Mie scattering.

Named after the father and son who discovered how periodic structures reflect light in a very regular and predicable manner, Bragg reflection is similar to the light from the sheen of oil on water, where multiple colors appear, depending on the thickness of the layers of oil on the water. The intensely reflective iridocytes of these iridescent stripes provide brighter color from a greater signal-to-noise ratio than adaptive iridocytes previously studied.

Mie scattering, based on the theory of German physicist Gustav Mie, disperses light so that all colors are seen at once, resulting in white. "Because of their periodic array, the lamellae reflect a unique, specific wavelength or color of light so when the thickness and the spacing changes, the color becomes specifically tunable," said Morse. "But Mie reflection scatters all wavelengths of light, producing white, so it is not tunable or selectable. Instead, these cells switch from clear to white."

In the cells that make up the squid's switchable white stripe, the vesicles change from completely transparent to optically dense, scattering light to reflect white when they shrink as a result of the condensation of the reflectins and the resulting expulsion of water and dehydration. This is the same mechanism of reflection seen in white paint, which consists of small nanoparticles of mineral with a range of small sizes that collectively reflect all colors so they appear white.

This central white stripe on the female squid occurs on the dorsal surface of the mantel between the fins, in the same location as the conspicuously bright white testis in the male. "Our best supposition is that the female can masquerade as a male to discourage multiple matings," said Daniel DeMartini, the doctoral student and co-author who discovered this feature. "The white stripe is turned on so it looks like the female has a testis. She may do this to protect the survival of her fertilized eggs, but that is just a suggestion."

"The ideal number of matings might be more than one but less than many," added Morse. "In other words, it might be best to have a few matings so that the female's eggs are fertilized by a few fathers to increase genetic diversity, making the offspring better able to survive under a range of environmental conditions like the rising temperature in the ocean, for example. The female wouldn't want to look like a male from the beginning because that would discourage all mating."

According to Morse, this new discovery of the switchable white cells and the fact that the underlying molecular mechanism is fundamentally the same as that driving the switchable or tunable color is further proof that transparent polymers –– in this case the polymers are proteins –– can be used to produce nanostructures that control the behavior of light.

"What we're looking for is ways in which the novel solutions that have evolved in biological systems might be harnessed to develop new routes to advanced materials with optical and electronic applications that differ from the conventional routes of present-day engineering," Morse concluded. "So the focus of our work is directed toward new applications that translate the mechanism from the world of proteins and living cells to the world of practical engineering with synthetic polymers."

This research was supported by the Army Research Office and the Office of Naval Research. Electron microscopy made use of instrumentation and facilities provided by UCSB's Materials Research Laboratory, which is supported by the National Science Foundation.

True colors: Female squid have 2 ways to switch color, according to a UCSB study 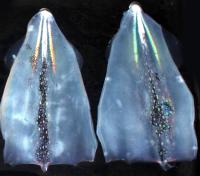