A new species of quail-sized fossil bird from 44 million year old sediments in Utah fills in a gap in the fossil record of the early extinct relatives of chickens and turkeys, and it shows strong links with other extinct species from Namibia in Southern Africa and Uzbekistan in Central Asia.

In their paper in the online scientific journal Diversity, the authors Dr. Thomas Stidham (Institute of Vertebrate Paleontology and Paleoanthropology, Chinese Academy of Sciences), Dr. Beth Townsend (Midwestern University, Arizona), and Dr. Patricia Holroyd (University of California Museum of Paleontology, Berkeley) describe the fossil of a distinct tiny bone from the shoulder girdle of an extinct quail-like bird from 44 million year old rocks in eastern Utah. While it is a unique fossil, the authors have not given it a formal scientific name, waiting until they find more bones of the skeleton. This new Utah bird appears to be the oldest fossil of the extinct group called Paraortygidae, a relative of the living Galliformes (the group that includes the living chicken, turkey, guineafowl, and quail). This fossil fits in a nearly 15 million-year gap in the fossil record of the galliform lineage in North America.

This extinct species is similar in size to the smallest living Galliformes like quail and hill partridges. It likely lived before the evolution of the large crop and gizzard that we see in living chickens and turkeys, and therefore the Utah species likely had a diet different from its living relatives. The earliest fossils of this paraortygid group are from arid habitats, the seashore, and inland forests demonstrating that they had flexibility in their ecology and diet.

Another interesting aspect of this new fossil is that it closely resembles the small size and unique shape of other early paraortygid fossils from sediments with a similar geological age from Namibia in southern Africa and Uzbekistan in Central Asia which were all separated from each other by oceans.

Dr. Stidham comments, "I didn't think much of the little fossil at first. It wasn't until I saw a recent paper by a Russian colleague describing a very similar fossil from Uzbekistan that I realized that we were looking at the same group of birds on different continents." The paraortygid fossils from Europe, Asia, Africa, and North America show that the group was very widely dispersed early in their evolution and crossed oceans in order to be so widely spread.

By contrast, Holroyd knew the find was something special the moment she turned it over with her pick. "I have worked with Beth Townsend in the Uinta Basin since 2011, and it was the first bird bone I had found there. They are incredibly rare, especially ones this small. I didn't think there was anything like it found there before and so snapped a picture to send to Tom even before we had left the field."

Dr. Townsend, the project leader, notes: "The new Uinta bird fills not only a time gap, but also helps us better understand the animal community at this time. The Uinta Basin is important for understanding ecosystems during times of global warm temperatures, when forests, primates, and early horses were spread across an area that is now desert. The discovery of this new paraortygid shows us that small ground-dwelling birds were part of these ancient forests and may have competed with early mammals for resources."

In summary, Dr. Stidham says, "Even tiny incomplete fossils can provide the data to link global scientific questions together." All of the scientists involved in this project are eager to search for more fossil discoveries in the eastern Utah during the next field season. 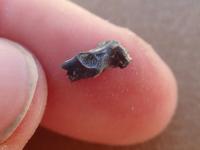 Fossil specimen as discovered in the field